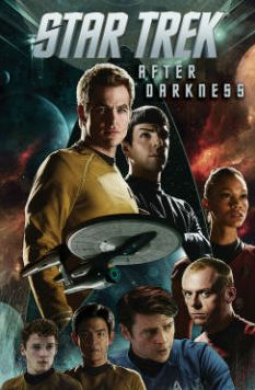 From the publisher: After Darkness picks up right where this year's blockbuster sequel Star Trek: Into Darkness leaves off!

Captain Kirk and the crew of the Enterprise face a dire new threat rising in the
wake of the movie's momentous events!
After watching Star Trek Into Darkness, I decided to read the newest volume of the Star Trek comic, After Darkness by Mike Johnson.  I was hopeful that it would pick up right where the movie left off.  For the most part, it did.
The first of two stories finds Spock dealing with a medical condition that affects male Vulcans every seven years.  The condition, which causes the male to go almost feral, is called “Pon Farr” and the only cure is to return to Vulcan.  The problem is that Vulcan no longer exists.  The rest of the story concerns finding a solution to this problem. I didn’t really find this arc very compelling, and I’m not really sure why.  Maybe it was because Spock, as a main character, is never really in any permanent danger of suffering lasting harm.
The second story arc has the Enterprise looking into an attack on a mining outpost by the Gorn.  However, who is to blame for the attack is not clear, and the Gorn may not really be what they appear to be.  This story, while not having the same impact on the characters as the first one, was much more satisfying.  It reminded me more of the Original Series tv episodes in nature, without attempting any major character changes along the way.
Where After Darkness connects with the movie, though, is in small snippets throughout the volume.  Here and there we get glances at the Klingons, as they begin to formulate a plan to make the Federation pay for the havoc John Harrison, Kirk and crew wreaked on the Klingon homeworld.  A mysterious figure in shadows communicating with the Klingons adds to the intrigue.  It feels like the pieces are being put in place for a major storyline in future issues; one that sounds way more exciting than those contained in this volume.
After Darkness is for Star Trek fans.  I don’t feel like it is set up to draw in the casual fan of the movies.  However, if the Klingon confrontation happens soon, there may be a larger group of people scrambling to see how the conflict began.
I received a preview copy of this book from IDW Publishing in exchange for an honest review.
Posted by Scott at 6:43 AM