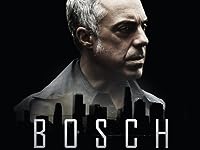 From Amazon:  An Amazon Original Pilot: Based on Michael Connelly's best-selling book series, Bosch (Titus Welliver), an LAPD homicide detective works to solve the murder of a 13-year-old boy while standing trial in federal court for the murder of a serial killer.

I love Michael Connelly's Harry Bosch books. The pilot for the show Bosch looks to be a good start to adapting what is quite possibly the most well-written and interesting mystery series of the last 20 years (at least). Based on the novel City of Bones, the pilot gets off to a nice start. Several reviewers complained of the slow pacing; however, anyone familiar with the novels would tell you that they generally move along at a very consistent pace, not rushing the action and letting the mystery play out at the proper speed. This also allows for tremendous character development, which Connelly excels at in his novels and I'm hopeful will be displayed in the tv series. Having often tried to picture an actor playing Bosch, I think Titus Welliver fits the bill pretty well. It's also fun to see Bosch's Los Angeles, particularly his home on the hillside. The jazz soundtrack is a nice touch and fits with the character as well. I have high hopes for this series, as Harry Bosch is a favorite of mine.

For a short time (only February, I believe), this episode is free on Amazon Instant Video.