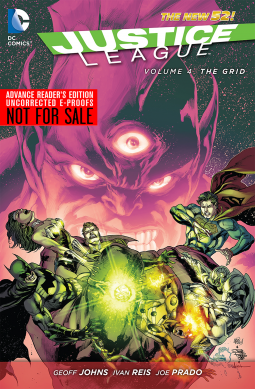 From the publisher: The event that the New 52 has been building towards since the beginning! #1 New York Times best-selling writer Geoff Johns (GREEN LANTERN, BATMAN: EARTH ONE) brings together almost two years of plot threads for an epic tale that will forever change the shape of the DC Universe. When the three Justice Leagues go to war with one another, who's side will everyone be on? Allies will be born, friends will become enemies and the DC Universe will never be the same.

In Justice League Vol. 4: The Grid, Geoff Johns has several storylines going on.  The initial story concerns the expansion of the Justice League, as Batman, Superman, Wonder Woman and the others recruit new members.  This meets with mixed success, including someone who is not exactly what they seem.

I have mixed feelings about this collection.  Geoff Johns is an excellent writer, but the initial story involving new Justice League members just didn't grab me.  The characters just weren't that interesting to me.  It may be my lack of familiarity with some of them, but this was just an average story for a writer who normally turns out spectacular work.

The crossover with the Trinity War is very cool, one of the bigger than life scenarios that the Justice League is made for.  It was fun to see the characters from the different teams interact, with all of their baggage and previous history together.  However, this book only has the Justice League part of the story.  Readers looking for the entire story would do better to wait and pick it up as its own collection.

I like the Justice League, and would recommend this book to fans of Geoff Johns and the League.  It's just not the best of the recent storylines.

I received a preview copy of this book from DC Comics in exchange for an honest review.
Posted by Scott at 6:41 AM