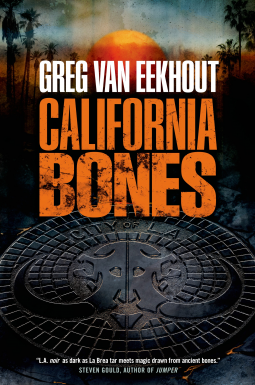 From the publisher: When Daniel Blackland was six, he ingested his first bone fragment, a bit of kraken spine plucked out of the sand during a visit with his demanding, brilliant, and powerful magician father, Sebastian.

When Daniel was twelve, he watched Sebastian die at the hands of the Hierarch of Southern California, devoured for the heightened magic layered deep within his bones.

Now, years later, Daniel is a petty thief with a forged identity. Hiding amid the crowds in Los Angeles—the capital of the Kingdom of Southern California—Daniel is trying to go straight. But his crime-boss uncle has a heist he wants Daniel to perform: break into the Hierarch's storehouse of magical artifacts and retrieve Sebastian's sword, an object of untold power.

For this dangerous mission, Daniel will need a team he can rely on, so he brings in his closest friends from his years in the criminal world. There's Moth, who can take a bullet and heal in mere minutes. Jo Alverado, illusionist. The multitalented Cassandra, Daniel’s ex. And, new to them all, the enigmatic, knowledgeable Emma, with her British accent and her own grudge against the powers-that-be. The stakes are high, and the stage is set for a showdown that might just break the magic that protects a long-corrupt regime.

Extravagant and yet moving, Greg van Eekhout's California Bones is an epic adventure set in a city of canals and secrets and casual brutality--different from the world we know, yet familiar and true.

What got me to read Greg van Eekhout's California Bones was the hook: A heist story with magic.  I'm a sucker for a good heist story.  Plus, I like magic in my stories.  What was not to like about this book?  As it turns out, there wasn't anything I didn't like.  I was sucked in right away and carried along until the very end.

Here's the summary: Daniel is an orphan, a petty thief, with a bit of magical ability.  His father was killed in front of him when he was young, and he has been hiding out from the Hierarch's men ever since.  Oh, the Hierarch is the ruler of the country of Southern California.  He's also an extremely powerful and dangerous magician.  When Daniel is hired to break into the Hierarch's vault to retrieve a sword, he gathers some friends and decides this is his chance for revenge.

California Bones is a great book.  The characters are very engaging, especially Daniel, Cassandra, and Moth.  The setting is great; Southern California is very similar to our California, with some subtle changes here and there, such as the use of canals for travel rather than roads.  The magic is unique, if a bit icky: power is transferred to the user by ingesting it.  That means eating the bones of other magicians will give you their power (this is a little gruesome, but is not overwhelmingly prevalent).  In addition, there are quite a few surprises and twists throughout that keep the reader from completely figuring out what is going on.

I really enjoyed California Bones, enough so that I checked on the possibility of a sequel as soon as I finished it (this is actually supposed to be a trilogy, so that's good).  This is a cool story, and I'd highly recommend it to fans of non-standard Urban Fantasy, Magical Heists, Cool Characters, and Unique Magical Systems.

I received a preview copy of this book from Tor/Forge in exchange for an honest review.
Posted by Scott at 9:28 AM