Half a King by Joe Abercrombie - Book Review 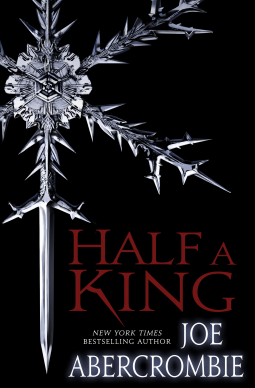 From the publisher: “I swore an oath to avenge the death of my father. I may be half a man, but I swore a whole oath.”

Prince Yarvi has vowed to regain a throne he never wanted. But first he must survive cruelty, chains, and the bitter waters of the Shattered Sea. And he must do it all with only one good hand.

The deceived will become the deceiver.

Born a weakling in the eyes of his father, Yarvi is alone in a world where a strong arm and a cold heart rule. He cannot grip a shield or swing an axe, so he must sharpen his mind to a deadly edge.

The betrayed will become the betrayer.

Gathering a strange fellowship of the outcast and the lost, he finds they can do more to help him become the man he needs to be than any court of nobles could.

But even with loyal friends at his side, Yarvi finds his path may end as it began—in twists, and traps, and tragedy.

Joe Abercrombie is known for his dark and gritty (grimdark) fantasy stories. With Half a King, Abercrombie brings that sensibility and style to the Young Adult market. While definitely not as vulgar and explicit as his adult novels, Half a King has all the hallmarks of an Abercrombie story but in a format suitable for teens.  This means the violence isn't as graphic and the language is toned down.  I actually found this very effective, as it much of the harshness understated, which actually made it more real to me.

Yarvi is the second son of the king, a young man with a deformed hand and a temperament more suited to studying than war and ruling.  He is planning on becoming a Minister (a type of doctor/advisor/medicine man), when he is informed that his father and brother have been killed by a neighboring barbarian king.  As he leads an armed force set on vengeance, Yarvi is spun off on a journey that will change and harden him.  He will discover that "family" doesn't always mean your blood relatives.

Half a King contains many familiar fantasy tropes, but in Abercrombie's hand they seem fresh.  He imbues his characters with a believability that causes the reader to want to find out what happens to them.  Yarvi is given depth as he moves through his journey to regain his throne, and he encounters many interesting people along the way, including Nothing, Sumael, Ralf, and Jaud, who, along with Yarvi, form an unlikely band of brothers. Abercrombie presents his characters in varying shades of grey, everyone having faults, with even the "heroes" becoming hard to root for at times. This can be a dangerous line to walk as an author, but Abercrombie does a masterful job.

The land of the Shattered Sea is explored in a general sense, with a few areas getting a little more attention than the rest, but it has a lot of potential as this series progresses.  The idea of a High King, the Ministry, and the religious ideas presented in Half a King also bear further exploring.

I found Half a King to be a very enjoyable book, one that I didn't want to put down.  The characters were engaging, the plot moved along at a brisk pace, and there were enough mysteries and surprises to keep it from becoming predictable.  In addition, the story is completely told, with no cliffhangers to keep readers waiting, but with enough set-up for the future to keep readers coming back.  I highly recommend this book and look forward to seeing how the story progresses in future books.

I received a preview copy of this book from Del Ray Spectra in exchange for an honest review.
Posted by Scott at 8:15 AM