You Herd Me! I'll Say It If Nobody Else Will by Colin Cowherd 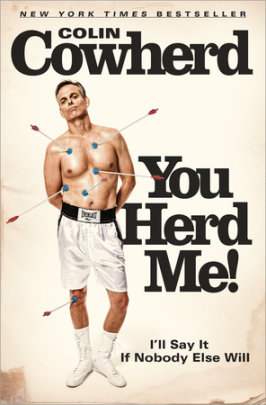 From the publisher: In this age of billion dollar athletic marketing campaigns, “feel good” philosophy with no connection to reality, and a Sports Media echo chamber that’s all too eager swallow whatever idiotic notion happens to be in vogue at the moment, it’s tough to find people who aren’t afraid to say what they’re really thinking.  But that’s where Colin Cowherd comes in. As his millions of fans on ESPN Radio and ESPNU already know, Colin is the rare sports analyst who’s brave (or crazy) enough to speak his mind—even if it pisses some people off. Of course, it helps that a lot of what Colin has to say is simply hilarious. Lots of writers can tell you about Boston’s storied sports history. But how many can tell you why the city of Boston is America’s five year old? Lots of writers will brag about the stuff they got right, but how many will happily list all the calls they got completely and utterly wrong? Whether he’s pointing out the stupidity of conspiracy theories, explaining why media bias isn’t nearly as big a deal as many assume, or calling out those who prize short term wins over sustainability, Colin is smart, thought-provoking, and laugh-out-loud funny.  Unapologetically entertaining and packed with behind-the-scenes insights you won’t get anywhere else, You Herd Me! is unlike any other sports book ever written.
Reading You Herd Me!, by Colin Cowherd, is the equivalent of listening to his radio show.  What I mean by that is that every chapter is a short essay on a single topic, much like a segment of his show would be.  Cowherd takes a topic, such as Jerry Tarkanian (ex-UNLV basketball coach) and riffs on it.  Often, the topic is discussed in the context of societal issues; conversely, Cowherd will approach a societal topic and couch it in sports terms (the impact of two-parent families; the success and stability of quarterback and point guard success is the example to prove the point).

Cowherd seems to be the type of talk show host that people either love or hate.  He has very strong opinions (not all of which I agree with) and tends to go on about them.  However, his arguments are usually grounded in solid facts and generally start from a logical premise.  I generally enjoy listening to his show, and find most of his opinions informative.  For me, You Herd Me! was more of the same.  It was informative, enjoyable, and quick.

As I mentioned, the book is composed of short essays, riffing on a single topic.  In addition, interspersed throughout the book are somewhat humorous and/or provocative quotes from Cowherd.  Finally, there are also some brief takes on sports subjects that don't really merit a deeper examination.  Because of the format, this is a very easy book to pick up and read, and then put down again.  Cowherd's voice comes through in the writing style. It's very easy to imagine him speaking about the varying topics as part of his show, in his trademark semi-sarcastic way.

I enjoyed reading You Herd Me! and would recommend it to sports fans.  If you are a fan of Cowherd's show, In The Herd, then I would highly recommend this book.

I received a review of this book from Three Rivers Press and the Blogging for Books program in exchange for an honest review.
Posted by Scott at 5:21 PM