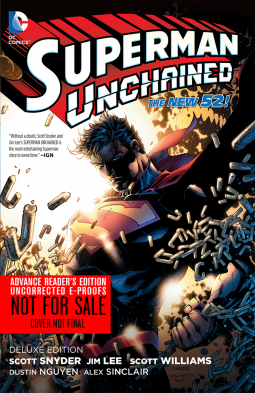 From the skies above Metropolis to the four corners of the globe to the star-streaked spaceways beyond, one man is synonymous with the word "hero." Since his arrival marked the dawn of the superhero age, Superman has waged a never-ending battle for truth and justice, no matter when or where.

But before the dawn came the darkness. When another with incredible power, far more than that of mortal man, fell to the Earth. One who could spell the end for the Man of Steel.

I haven't been the biggest fan of the individual Superman books in DC's New 52 continuity.  However, I really enjoy Scott Snyder's writing (particularly on the Batman titles) and Jim Lee's art, so I decided to give Superman Unchained a chance.  I wasn't disappointed.  Synder and Lee told a story worthy of the mini-series format, free from entanglements with ongoing storylines.

Superman discovers that he is not the first alien to fall to Earth.  The new character Wraith, with a similar arrival on Earth as Superman's, has been hiding in the shadows, saving the U.S. as a "soldier" for the U.S. military, in a secret organization being run by General Lane.  Upon meeting Superman face to face, the two beings do the typical fight-then-become-allies dance.  Meanwhile, a group of cyber-terrorists known as Ascension are attempting to send humanity back to the dark ages, like some extreme group of Luddites.  Lois Lane gets a hot tip and finds herself in the middle of Ascension's plans.  And in and amongst all this, Lex Luthor begins to unveil his master plan, with Jimmy Olson caught in the middle.  As the various plot lines converge, Superman once again shows how his flaws and heroic nature demonstrate the best of what makes us human.

This was a fun book, with a lot going on at all times.  I often found myself wondering how the various storylines would relate to each other, but Snyder once again drew everything together seamlessly.  Wraith proved an interesting character, and Ascension was a nice new threat.  Luthor is portrayed as a genius who wants to both save mankind and end Superman, with a bit of an edge (he reminded me of a Batman-type villain).  The climatic events were big enough to truly fit the story, without seeming too over-the-top.

The art by Jim Lee was terrific.  He is one of my favorites, particularly when he is drawing Superman and Batman.  The full page layouts were great and very cinematic.

I highly recommend this book to Superman fans, and to those who want a good story without all the backstory necessary in so many of the ongoing series.

I received a preview copy of this book from DC Comics and Netgalley in exchange for an honest review.
Posted by Scott at 8:57 AM