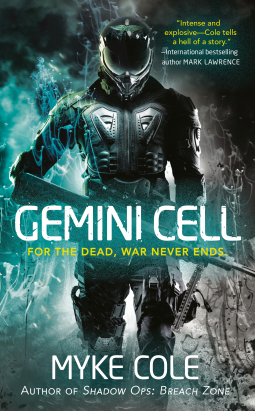 From the publisher: Myke Cole continues to blow the military fantasy genre wide open with an all-new epic adventure in his highly acclaimed Shadow Ops universe—set in the early days of the Great Reawakening, when magic first returns to the world and order begins to unravel…

US Navy SEAL Jim Schweitzer is a consummate professional, a fierce warrior, and a hard man to kill. But when he sees something he was never meant to see on a covert mission gone bad, he finds himself—and his family—in the crosshairs. Nothing means more to Jim than protecting his loved ones, but when the enemy brings the battle to his front door, he is overwhelmed and taken down.

That should be the end of the story. But Jim is raised from the dead by a sorcerer and recruited by a top secret unit dabbling in the occult, known only as the Gemini Cell. With powers he doesn’t understand, Jim is called back to duty—as the ultimate warrior. As he wrestles with a literal inner demon, Jim realizes his new superiors are determined to use him for their own ends and keep him in the dark—especially about the fates of his wife and son…

I have read Myke Cole's previous books in the Shadow Ops series and enjoyed them, so I was eager to read Gemini Cell.  First, Gemini Cell is not a continuation of the previous series.  It is a look at another part of that world, probably happening before the first series begins.  With that said, I like the idea of discovering how magic affects other characters, and how they deal with it, so this approach is welcome.

When Navy SEAL Jim Schweitzer was attacked and killed, it appeared to be the end. However, he finds himself awake, and his body no longer occupied by him alone.  It seems he now shares his body with a Jinn, which brings with it incredible abilities but incredible danger as well.  With the constant inner struggle to battle and the quest for his family to sustain him, Schweitzer because a new kind of soldier, a weapon of magic, for the military.

I've got to say that I didn't enjoy Gemini Cell nearly as much as the previous Shadow Ops books.  It moved very slowly through the first 2/3 of the story, with much of it inner dialogue between Schweitzer and the jinn.  That in itself isn't bad, but many of the themes and ideas were repeated over and over.  Occasional perspective shifts helped me muddle through this early part, but I never found myself excited to read, it was more of a chore.  The last 1/3 helped somewhat, as events picked up speed, and the characters began evolving, rather than remaining static.  As the storylines converged, the book ended, setting the stage for at least a sequel.

The character of Jim Schweitzer was interesting.  He walks a fine line as a SEAL, willing to do bad things for the greater good and the service of his country.  He is also highly trained; combine that with magic and you've got a dangerous weapon, a magically enhanced killing machine who is desperate to find his wife and son.  This quest, once embarked upon, was interesting, and Schweitzer's character arc got better and better as the story moved along.

As I mentioned, the story ends almost abruptly, with plenty of loose threads for a sequel.  As much of Gemini Cell seemed like set-up, I believe this is a good thing.  Schweitzer is an established character, confident in his new abilities, he seems to know who the "bad guys" are, and the world will soon be exploding with magic. And though it went mostly unexplored, I believe Eldredge, Schweitzer's superior at the Gemini Cell, has the potential to be a very interesting character. The exploration of different magical abilities also shows promise for future adventure.

All in all, I had higher expectations for Gemini Cell.  Myke Cole set the bar very high with his previous trilogy.  While I wasn't thrilled with this book, the slow pace may work well in service to other books in this series.  However, judged on its own, it is just average. I would recommend it Myke Cole fans, with the caveat to be open to a different type of story than you are used to.

I received a preview copy of this book from Ace and Netgalley in exchange for an honest review.
Posted by Scott at 8:10 AM