The Flash Vol. 6: Out of Time by Robert Venditti - Book Review 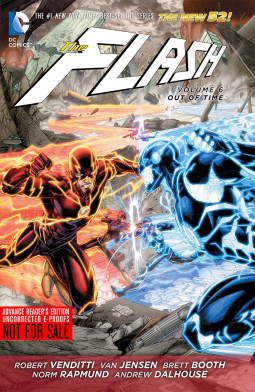 From the publisher: The start of a new era for the Fastest Man Alive! In the future, The Flash is a broken man. His powers have failed him time and again at great cost to him and the city he has sworn to protect. Now he's coming back to the current time to stop the one event that destroyed his life. Meanwhile, in the present, Barry Allen must contend with thieves trying to capitalize on the devastation of FOREVER EVIL. It's a tale of two timelines that ushers in one of The New 52's most anticipated character debuts!

With the success of the new Flash television show, the character is firmly on the radar of many people. The comic book Flash is primed to take advantage of the attention. With The Flash Vol. 6: Out of Time, the book debuts a new writer, Robert Venditti, and looks to head in a new direction. However, there are mixed results, mostly due, in my opinion, to the way Flash has been developed in the New 52 era.

First the successes: This volume introduces Wally West, Iris West's nephew. Long-time fans know Wally West becomes Barry Allen's sidekick, Kid Flash. This is a promising development for the future, and Wally plays an important role. Secondly, a version of Barry Allen/Flash is traveling back through time from the future to fix the Speed Force, which is broken, and to set right some events (this leads to a tremendous scene with Leonard Snart). I've always enjoyed the time travel aspect of the Flash stories, and this is the most interesting storyline in the collection.

Now the not as good: The story taking place in the present is uninteresting and repetitive. Someone is using the weapons/equipment from old villains in what seem to be random acts of violence. This basically follows the same pattern for four or five issues. Also, Barry is a little gloomy and mopey, not at all in line with the generally positive character he is usually portrayed to be. Another problem is Barry's relationship with Patty. It seems to be going in circles, with conversations taking on a "been there, done that" pattern.

I found the Flash to be a very interesting and engaging character leading up to the New 52, but since the reboot, I feel like the character has been somewhat lackluster. I realize that the comics come first and serve as a basis for the tv show, but right now the show seems to have captured the fun of the Flash more than the books. In the interest of attracting new readers, I would think the writers might want to tap in to what is working so well in the show.

Overall, Robert Venditti's The Flash Vol. 6: Out of Time is a slightly above average storyline. The time travelling is what elevates it above average. This is not the best volume for new readers (it jumps right in to post-Forever Evil repercussions), but it bears watching to see how Venditti plays out the cliffhanger he ended the book with.

I received a preview copy of this book from DC Comics in exchange for an honest review.
Posted by Scott at 8:25 AM