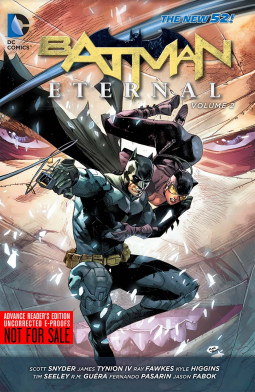 After Commissioner Gordon's arrest, Batman's world is turned upside down. New allies emerge, old allies fall and his rogues gallery of villains are not quite who they seem. With a new power structure being established in Gotham amidst rising tension and chaos, can Batman adapt to the changing status quo? Written by Snyder and a team of the industry's best young creators including James Tynion IV, Tim Seeley, Jason Fabok and Dustin Nguyen, BATMAN: ETERNAL VOL. 2 will shift the Batman mythos forever!

Scott Snyder's Batman Eternal might be my new favorite Batman book. At this point, it seems to be relatively free from any entanglements with the various other Batman series, and with the DC universe at large. This makes for a tight and focused book. I found myself flying through this collection, and now looking forward to the next one to see how the story wraps up.

A quick synopsis: Things pick up where the previous collection left off, with Commissioner Gordon in jail, Jason Bard the new commissioner, Alfred Pennyworth abducted, Batman wanted, and general chaos all over Gotham. This would include Killer Croc roaming the sewers on a mission; Cluemaster after his daughter, Spoiler; Blackfire attempting to bring a literal Hell to Gotham; the Architect going after various buildings; a gang war; Joker's Daughter working with Blackfire; and Hush roaming around. Into this mix come a variety of heroes, new and old: Red Robin, Batgirl, Red Hood, Catwoman, and Spectre have been around, while Harper, Batwing, and Julia Pennyworth (Alfred's daughter) are fairly new.

Snyder takes all these ingredients and mixes up one heck of a story. What is becoming apparent is that Batman Eternal is not a series of small story arcs, but one long, continuous story. The bad guys are bad; the good guys are easy to root for. There are surprises throughout, and Snyder isn't finished yet. He is definitely playing the long con with the readers. There is another volume to come, and I can't wait to see how it all turns out.

I highly recommend Batman Eternal Vol. 2 by Scott Snyder. This is THE Batman book to be reading, and Snyder is at the top of his game.