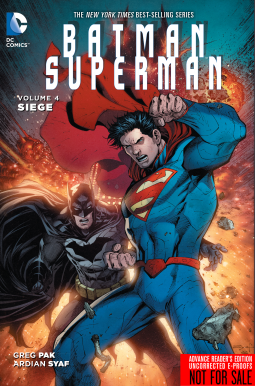 From the publisher: WHO IS SUPERMAN’S JOKER?
Someone is targeting the people closest to Superman—those who wear his sigil, those he cares most about, even innocents whose lives he’s saved. The attacks seem random, but Batman recognizes the pattern. A madman who hates you so much he strikes at the people around you…this is Superman’s Joker.

Worse, the method of the attacks is even more bizarre: the bullets leave no residue, no clues, then seem to disappear into nothingness. Even the World’s Greatest Detective is at a loss.
But when Batman hatches a plan to draw the killer out of hiding, a crucial clue is uncovered—one that reveals that the killer is more closely tied to Superman than they could have imagined! Can Superman, Batman and Supergirl defeat this threat from Superman’s past…or will Superman’s Joker prove to be his final undoing?

Greg Pak's Batman/Superman has been a pretty good read in the past. In fact, I thought the first volume was spectacular. The latest collection, Siege, is another good story. It revolves around the idea that there is a "Joker"-type villain for Superman, and what would happen if he began targeting all of Superman's closest friends and allies.

While I enjoyed this story, it wasn't quite up to the lofty standards that earlier collections set. It was still entertaining, and I will continue to look forward to Pak's future storyline. The art was also well done, but again, not to the level of earlier collections, particularly Jae Lee's artwork.

I would recommend Batman/Superman Vol. 4: Siege to fans of Batman and Superman, and those who have read the earlier collections.

I received a preview copy of this book from DC Comics and Netgalley in exchange for an honest review.
Posted by Scott at 9:16 AM