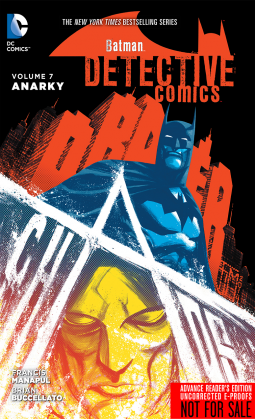 From the publisher: Award-winning creative team of Francis Manapul and Brian Buccellato continue their groundbreaking run on Detective Comics with the return of a long lost Batman villain, Anarky.

As Gotham City decends into chaos at the hands of Anarky and his quest for revenge on both the villains and protectors of Gotham. Batman must team up with the cantankerous Harvey Bullock of the Gotham City PD to find Anarky's true motivation for bringing Gotham to it's knees.

Brian Buccellato's latest Detective Comics collection, Vol. 7: Anarky, is a good read. Rather than one long story, this collection contains several stories. The main storyline focuses on the character of Anarky, in his New 52 debut. Batman catches the Mad Hatter with the skeletons of several children, while Gotham is put on alert by a villain calling himself Anarky. Anarky distributes masks to every citizen, while also wiping out the digital imprint of every person. This causes mass chaos, and Batman is left to put the pieces together. This is a pretty good story, with several elements coming together in the end, like a good mystery should.

The other two-part story involves a plague being released via an airplane landing at Gotham International Airport. This story has a focus on Batman's problem solving skills, rather than the traditional super-villain confrontation. It was a refreshing reminder that Batman is indeed the world's greatest detective, not merely a superhero. Buccellato does an excellent job highlighting this aspect of Batman.

Although the back of this collection states that it only has Detective Comics 35-40, my copy included two more stories. Detective Comics: Engame #1 is a tie-in with the Joker story Endgame. It introduces the character of Moneyspider, a hacker who plays a role in the Anarky storyline. Also in this collection is the Detective Comics: Futures End #1. This story has a team-up between Batman and the Riddler, as they go after the Calendar Man. I enjoyed this story; however, I'm not overly familiar with the Futures End storyline, so I can't comment on how exactly it fits in.

Overall, I enjoyed Detective Comics Vol. 7: Anarky, and would recommend it to fans of Batman.

I received a preview copy of this book from DC Comics and Netgalley in exchange for an honest review.
Posted by Scott at 8:24 AM