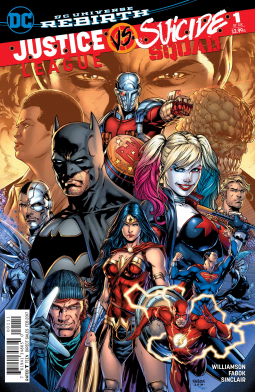 From the publisher: The first major event storyline of DC’s Rebirth era begins with a day Amanda Waller always knew would come: the Justice League discovers the existence of the Suicide Squad! This government-sponsored black-ops team of super-villains with bombs implanted in their brains is obviously a deal-breaker for Earth’s paragons of truth and justice! But you can bet that the Wall and her Task Force X won’t go down without the fight to end all fights as this weekly series gets underway!

Justice League vs. Suicide Squad #1, by Joshua Williamson, is a great opening shot in what promises to be a fun event series. What happens when you discover many of the villains you've put in prison are out and working together? That's the dilemma facing the JL.

The Suicide Squad is tasked by Amanda Waller to stop a crazy cult leader from causing an earthquake and killing thousands. In typical Squad fashion, things go a little sideways. Meanwhile, Batman informs the Justice League of the Squad's existence, and of his experience with Amanda Waller. Finally, with all of this going on, a mysterious figure has freed some very bad people from a very secure prison.

In this first issue, Williamson has done an excellent job of putting the pieces on the board and setting up the game. I'm anxious to see how the conflict between the two teams plays out, both physically and philosophically. I'm also curious to see just what the third party has in store, as well.

As the first major event of the Rebirth era, Justice League vs. Suicide Squad has a high bar to meet. Joshua Williamson's first issue has opened the series in fine fashion. I highly recommend this book, and series, to fans of the JL and Suicide Squad, and to fans of big event books.

I received a preview copy of this book from DC Comics in exchange for an honest review.
Posted by Scott at 8:16 AM