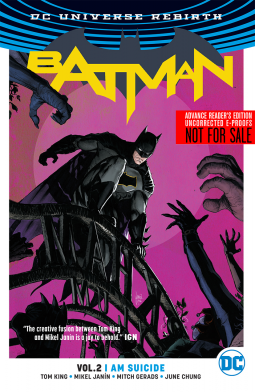 From the publisher: Still reeling from the events of "I AM GOTHAM," the epic first arc in Tom King's brand new BATMAN series, the Dark Knight finds himself up against some of the biggest (literally) threats he's ever faced within the city limits of Gotham. To save the city he loves, Batman enlists the help of the toughest members of the Bat-family including Nightwing, Batwoman and more!

Also in this volume, Batman must take on some familiar foes who have stolen something from Gotham--and the Caped Crusader's limits will be tested as he fights to get it back.

Batman Vol. 2: I Am Suicide, by Tom King, took the promise of the I Am Gotham storyline and ramped it up. This was a great book with many twists and turns as the story progressed. In the wake of her breakdown, Batman decides Psycho Pirate is the only one who can help Gotham Girl. However, the Pirate is being held captive by Bane on the prison island of Santa Prisca. Bane relies on the Pirate to help in the absence of the Venom Bane used. To get the Pirate from Bane, Batman puts together a team that includes the following: Catwoman, Bronze Tiger, Punch, Jewelee, and the Ventriloquist. How they get in to the prison, and how they go about trying to take Psycho Pirate, make up the bulk of the book. The final two chapters act as an epilogue, with a focus on Catwoman and Batman.

I thought this was a fantastic story. King told a Batman story like none I have read before. I'm not sure that I can put my finger on a specific thing, but it just felt different and right. For one, the team Batman was using very unusual and atypical, with more of a villain feel. Also, Batman's attitude was different, more desperate than he's been in a long while, maybe ever. He is also more brutal and devious. This almost felt like a Dirty Dozen type story. It was very cinematic in scope, and the art added to the feel. It was big and bold, full of action and emotion. Additionally, King did a great job exploring the relationship between Batman and Catwoman. He was able to add depth to this very complicated relationship.

I highly recommend Batman Vol. 2: I Am Suicide. Tom King just keeps getting better. I'm anxiously awaiting the next volume in this opening "I Am" arc, I Am Bane.