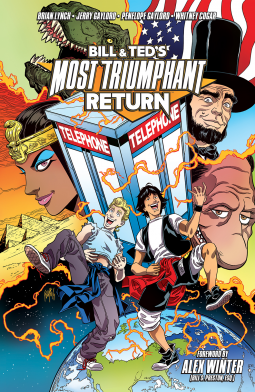 From the publisher: Bill and Ted must now fulfill their destiny to become the inspiration for galactic harmony, but at what cost! In an adventure of epic proportions, one change to the future will set the Wyld Stallyns on a time-travelling odyssey of music, villainy, history, and excellence!

I just finished reading Brian Lynch's Bill & Ted's Most Triumphant Return. It was an entertaining book that captured the spirit of the original movie, Bill & Ted's Excellent Adventure. The story picked right up from the sequel film, Bill & Ted's Bogus Journey, with our heroes Bill and Ted having won the San Dimas, California Battle of the Bands. Now, however, they have to write a second song. What to do...if only they had access to a time machine in the form of a telephone booth (remember those?) Wait, they do. Bill and Ted head into the future to find out what their second song is. Along the way, they run in to the teenage version of their arch-nemesis Chuck de Nomolos. They decide they want to help him out so he won't grow up evil and decide to kill them. What happens next could only have happened to Bill and Ted. Time-travelling shenanigans ensue, and everyone learns more excellent lessons from Bill and Ted.

I loved the original movie when I was a kid, the second less so. But regardless, when I realized that the story of Bill and Ted was continued, I leaped at the opportunity to read and review it. And my verdict is that Bill & Ted's Most Triumphant Return is good. It's a fun adventure, and Lynch perfectly captures the spirit of the movies. Many of our favorite characters return, and there is more development of the world that the music of Wyld Stallyns (Bill and Ted's band) inspires. My only caution is that it's different to read Bill and Ted's adventures rather than just watching them.

In addition to the main storyline, the collected edition of Bill & Ted's Most Triumphant Return also contains multiple short stories starring some of the side characters from the movies.

Overall, I can recommend Bill & Ted's Most Triumphant Return by Brian Lynch. I particularly recommend it to fans of the movie, but I think new readers may enjoy it as well. And remember, Be excellent to each other! And party on, dudes!

I received a preview copy of this book from Boom Studios and Netgalley in exchange for an honest review.
Posted by Scott at 6:44 AM