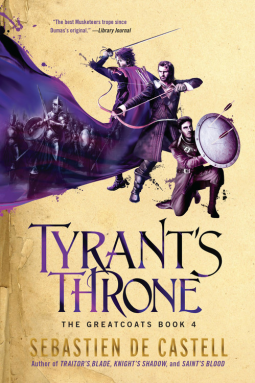 From the publisher: After years of struggle and sacrifice, Falcio val Mond, First Cantor of the Greatcoats, is on the brink of fulfilling his dead king's dream: Aline, the king's daughter, is about to take the throne and restore the rule of law once and for all.

But for the Greatcoats, nothing is ever that simple. In the neighboring country of Avares, an enigmatic new warlord is uniting the barbarian armies that have long plagued Tristia's borders--and even worse, he is rumored to have a new ally: Trin, who's twice tried to kill Aline to claim the throne of Tristia for herself. With the armies of Avares at her back, led by a bloodthirsty warrior, she'll be unstoppable.

Falcio, Kest, and Brasti race north to stop her, but in those cold and treacherous climes they discover something altogether different, and far more dangerous: a new player is planning to take the throne of Tristia, and with a sense of dread the three friends realize that the Greatcoats, for all their skill, may not be able to stop him.

As the nobles of Tristia and even the Greatcoats themselves fight over who should rule, the Warlord of Avares threatens to invade. With so many powerful contenders vying for power, it will fall to Falcio to render the one verdict he cannot bring himself to utter, much less enforce. Should he help crown the young woman he vowed to put on the throne, or uphold the laws he swore to serve?

It took me awhile to get around to reading Tyrant's Throne by Sebastien de Castell, mostly because I had it as an ebook and I just didn't want to tackle it on my iPad. However, having just finished it, I find myself wishing I would have begun it when I first received my copy.

Tyrant's Throne is the fourth, and final, book in the Greatcoats series. Very quickly, this series is in the vein of the Three Musketeers stories by Alexandre Dumas. For example, a Greatcoat = a Musketeer. In fact, while reading the series, I often pictured the three leads, Falcio, Kest, and Brasti, as the actors who played Athos, Porthos, and Aramis in the BBC's most recent Musketeers series. And like the Three Musketeers, de Castell has filled his Greatcoats series with adventure, wit, honor, betrayal, sorrow, joy, tragedy, and friendship. All told, this made a perfect recipe for a series to read and enjoy.

In Tyrant's Throne, Falcio (the First Cantor, or leader) of the Greatcoats has finally achieved the mission his late King left for him: put his daughter Aline on the throne and restore the rule of Law in the country of Tristia. However, as in the case of all the books in the series, nothing is ever that simple, nor is it easily accomplished. Falcio and his friends are betrayed by numerous parties, they face the tragedy of death, they fight battles and wars, and deal with their inner demons. In the course of this tale, the reader meets several more Greatcoats. We explore more nooks and crannies of Tristia. We discover more of the secret history of Tristia, involving the Trattari, the Bardatti, the Honoroi, the Dashini, the Rangieri, and others. We see Falcio fly by the seat of his pants, Kest stand in against all odds, and Brasti display his lovable arrogance.

I could go on and on about the plot, but I really don't want to give anything away as far as details go. But, I would like to point out some things I really enjoyed about this book, and the series as a whole. De Castell's Greatcoats are wonderful characters, and I would rather like to read short stories involving some of the lesser known Greatcoats. Throughout Tyrant's Throne, and the series, there was a balance of joy and sorrow, triumph and despair, and de Castell did a spectacular job of conveying all of this. I was constantly surprised by the turns the story took, in a good way. They weren't predicatable, the specter of death was very real for all the characters, and the characters' personalities jumped off the page, particularly that of Falcio. A three-dimensional character, Falcio (the first person narrator of all four books) was equal parts idealistic hero, despairing friend and father figure, clever and sarcastic leader, and absolutely loyal in all areas. His interactions and relationship with Kest and Brasti formed the spine of the stories and I enjoyed the interactions and obvious brotherly love between the three of them.

I also want to compliment de Castell. Having read a number of series that maybe didn't end satisfactorily, I can only imagine how hard de Castell had to work to finish off the Greatcoats series on the right note. Let me tell you, he succeeded. The ending felt honest and true to the story he began in book one, Traitor's Blade. Nearly every thread was brought to some type of conclusion, and the quest to fulfill the King's dream was seen to its end. De Castell also took the time to spend a couple of chapters after the climax showing us what the characters were planning on doing next. This allowed us to spend a little more time with Falcio, Kest, Brasti, and the rest. It was as perfect an ending as I could have hoped for after reading all four books.

Finally, I highly recommend the Tyrant's Throne by Sebastien de Castell, and the entire Greatcoats series. It's not often that I come to the end of a book or series and find myself wishing I could spend more time with the characters (Lonsome Dove and The Time-Traveler's Wife come to mind right off the bat), but that's where I found myself when I finished the last page. Fortunately, de Castell has said that the Greatcoats will return sometime in the future. All I can say is "Bravo" and go grab a copy of the books and get started.

I received a preview/review copy of this book from Quercus/Jo Fletcher Books in exchange for an honest review.
Posted by Scott at 1:07 PM