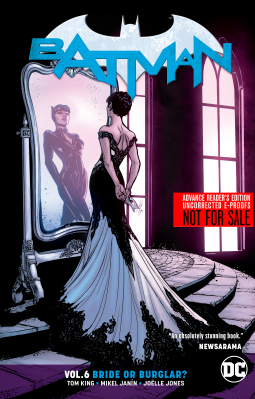 From the publisher: A young admirer of Bruce Wayne's, Mattie, wants nothing more than to grow up to be like his millionaire idol. But what would happen if Mattie was forced to relive the worst tragedy of Bruce Wayne's life and his parents were murdered? Batman's hunt for the killer brings him face to face with a strange mirror image of his own painful past.

This stunning series continues as Batman and Wonder Woman's storied friendship--one that has stood at the heart of the DC Universe since the beginning--unravels while the universe itself begins to crumble around them.

Batman Vol. 6: Bride or Burglar by Tom King continues the story leading up to the wedding of Bruce Wayne/Batman and Selina Kyle/Catwoman. This particular volume contains four stories that highlight different aspects of Bruce and Selina's personalities and character, both together and alone.

The first story shows Bruce providing comfort and help to a young boy who's parents were killed, much like Bruce experienced himself. As Bruce digs deeper, however, something much darker begins to emerge. This story bordered on horror, and King might have set the stage for a new villain.

The second story splits the Bat and the Cat up. Batman travels to another dimension along with Wonder Woman, where they will be filling in for The Gentle Man in his endless battle against a demonic horde trying to reach our dimension. Meanwhile, Catwoman chaperones The Gentle Man himself as he gets a chance to check in on his wife. Both Bruce and Selina realize some things about love, marriage, and commitment. There were some tender moments and some near-heartbreaking moments as the two fought to return to each other.

The feature story was a three-part tale starring Poison Ivy and dealing with some of the fallout from the War of Jokes and Riddles storyline. After killing some men, Ivy struggles to come to terms with her actions. She decides she needs to make the world a better place, something she accomplishes by taking over every person on Earth except Bruce and Selina. This was a fascinating examination of the trauma of violence and trying to process and deal with your own awful actions. King is very careful to not pass judgement on Ivy, but presents her actions as those of someone who has been broken and doesn't know how to pick up the pieces and move on. It is a moving and well-written tale.

The final story is a look at Selina Kyle, and presents how a cat-burglar like Catwoman might go wedding dress shopping. It is a simple story, full of heart, with an eye to both the past and future. It is plain to see just how much Selina cares about Bruce and wants this relationship to work.

King hits another one out of the park with Batman Vol. 6: Bride or Burglar. It is a wonderful collection of stories of all sorts of tones and moods. Through it all, the focus remains on Bruce and Selina. King's characterization is terrific, and their engagement and inevitable wedding are making for some excellent stories. I highly recommend this book, particularly to Batman fans. However, it will have an appeal for new readers, as well.