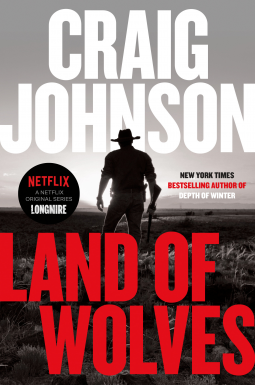 From the publisher: Attempting to recover from his harrowing experiences in Mexico, in Land of Wolves Wyoming Sheriff Walt Longmire is neck deep in the investigation of what could or could not be the suicidal hanging of a shepherd. With unsettling connections to a Basque family with a reputation for removing the legs of Absaroka County sheriffs, matters become even more complicated with the appearance of an oversize wolf in the Big Horn Mountains to which Walt finds himself feeling more and more empathetic.

Craig Johnson's latest Walt Longmire book, Land of Wolves, picks up shortly after the last book ended. Walt is still dealing with the physical, mental, emotional, and spiritual effects of his adventure/ordeal in Mexico. His way of coping is jumping back into his job, and so when a dead sheep is found (echoing the beginning of the very first Longmire book), Walt and Vic find themselves investigating. The sheep leads to a dead shepherd, who appeared to have hanged himself, but things aren't really that clear cut in Absaroka County. As Walt follows where the clues lead him, he discovers that a lone wolf in the Bighorn Mountains, a missing persons case, a Basque family with ties to Walt that go way back, and the death of the shepherd all intertwine to create an engaging story that forces Walt to really look at what his future holds in light of his age and experiences in Mexico.

I really enjoy the Longmire books. Craig Johnson has created a wonderful lead character in Walt Longmire. There is depth and growth from book to book, and Land of Wolves is no different. Walt is a different man after all he went through as he hunted down Thomas Bidarte. He is still recovering from knife wounds and is prone to just zoning out for minutes at a time. His relationships are suffering, particularly with his daughter and granddaughter. He is seriously considering what life would be like if he were to step down as sheriff. This Walt like we haven't seen him before, and it's this type of character development that keeps the series fresh nineteen books in.

The supporting cast is another highlight in the Longmire books and this time its Undersheriff Vic Moretti (Walt's love interest) and Deputy Sheriff Sancho Saizarbitoria who are front and center. Vic's no-nonsense attitude and tough love help support Walt throughout this case and his recovery. Sancho is Basque, which comes in handy as Walt has to navigate the somewhat tangled family history of a local Basque family. Ruby, Henry, and Cady are also present, but only make cameo appearances (which is too bad, because Henry Standing Bear is a terrific character in his own right). Finally, the setting itself is like a character. The northwest corner of Wyoming, full of wide open spaces and mountains, is such a contrast to the more typical big city mysteries that are prevalent.

The mystery in Land of Wolves is good. Walt just keeps collecting evidence and following leads as the tension builds and the story slowly unfolds, plot threads converging. As family secrets are laid bare, Walt finds himself staring down his future with an almost mystic like quality. Often in the Longmire books, Native American religion plays a role, and that is the case again in Land of Wolves. This adds a spiritual depth to Walt's life that further builds the character.

I really enjoyed Land of Wolves. Craig Johnson has written another engaging and entertaining chapter in the life of Sheriff Walt Longmire. I recommend this to fans of the series. Readers new to the series would enjoy it as well, but while the story itself is self-contained, it definitely references many events from previous books.

I received a preview copy of this book from Viking and Netgalley in exchange for an honest review.
Posted by Scott at 3:57 AM