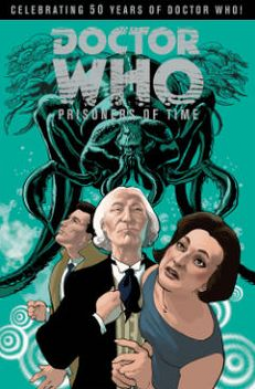 From the Publisher: November 23, 1963: A day that changed the world forever.

That day saw the broadcast debut of Doctor Who, which was to become the longest-running science fiction series on television.

And now, 50 years later, we pay tribute to one of the greatest pop-culture heroes of all time with this special series, which tells an epic adventure featuring all 11 incarnations of the intrepid traveler through time and space known simply as... the Doctor.

As a casual fan, I'm always intrigued when multiple incarnations of the Doctor get together, so I decided to give this book a shot. This collection (the preview edition I received) is the first three issues of the 12 issue Prisoners of Time story.  Each issue has a different aspect of the Doctor, all three of which I was unfamiliar with.  These issues dealt with the first, second, and third Doctor and their (his?) companions. Each story was a self-contained story with the Doctor confronting a different villain from the show, and each ended with the mysterious disappearance of the companions.  I found the stories rather ordinary. The overarching mystery of the series is all 11 aspects of the Doctor finding and rescuing the companions.

With only a passing knowledge of Doctor Who at best, and the more recent shows at that, I found myself very confused by much of what was happening.  I was unfamiliar with the various companions, and the villains weren’t any of the ones I knew (Daleks, Weeping Angels, Cybermen, etc.).  I imagine that a true Doctor Who fan would find much to like in this series.  However, for the casual or new fan, I wouldn’t recommend starting with this story.

I received a preview copy of this book from Netgalley and IDW Publishing in exchange for an honest review.
Posted by Scott at 6:03 PM