A Discourse in Steel by Paul S. Kemp - Book Review 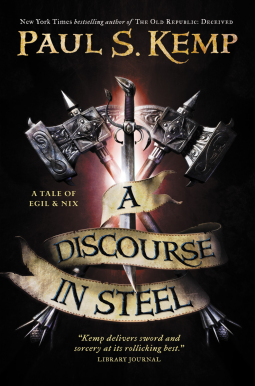 From the publisher: Egil and Nix have retired, as they always said they would. No, really – they have! No more sword and hammer-play for them!
But when two recent acquaintances come calling for help, our hapless heroes find themselves up against the might of the entire Thieves Guild.
And when kidnapping the leader of the most powerful guild in the land seems like the best course of action, you know you’re in over your head…

A Discourse in Steel is the 2nd book in Paul S. Kemp’s Egil and Nix series.  It is a fun sword and sorcery fantasy in the tradition of Fritz Leiber and others.  It is also a nice change from the large, world-changing fantasy series, as it focuses on a smaller group without the threat of an army/bad guy looking to enslave everyone.
Egil and Nix are adventurers, tomb robbers (in the vein of Indiana Jones), and part owners of a bar/brothel.  They don’t go looking for trouble, but are fiercely loyal to their friends.  The story is a traditional sword and sorcery tale, wherein Egil and Nix investigate Blackalley, a mysterious entity that lures unwary citizens into it, causing them to disappear.  Shortly after this, Egil and Nix become mixed up with the local Thieves Guild, due to an unfortunate circumstance involving two friends of theirs, a pair of sisters that are near to their hearts.  Magic, mayhem, and deaths occur in short order, as the various threads of the story begin to come together.  The resolution is satisfying, but also a little melancholy.
While the plot of A Discourse in Steel is entertaining, it wasn’t anything particularly new.  It is in the characters, particularly Egil and Nix, that Kemp shines and draws the reader in.  The comparisons to Leiber’s Fafhrd and the Gray Mouser are obvious, and are a nice homage to the classics of the genre.  However, I also was reminded of the Hawk and Fisher series by Simon R. Green.  Egil is the power of the duo, a large kind-hearted priest (the only one of the god he follows), who is constantly dealing with the loss of his wife and daughter.  Nix is the smaller of the two, the brains and the one who leans towards using magic (he was a student at the Conclave, a magic school of sorts, for a time).  The interplay between the two is well-done, and their friendship is the bedrock of the story.  As I continued to read, a nagging feeling that I knew these characters already kept popping up.  They had an easy interaction, often insulting each other as only two good friends can.  Additionally, the roadblocks they encountered grew worse and worse, if there are varying degrees of life-threatening circumstances.  What struck me was that none of what they were doing was for their benefit; they were simply helping out friends who needed it.  Also, Egil and Nix have a very strong moral compass.  They are not “good” people, but they are willing to take on and do hard things to prevent others from having to do them.  In short, Egil and Nix are Spenser and Hawk, the heroes of Robert B. Parker’s fantastic Spenser series.  And that is good company to be in.
The city of Dur Follin is an interesting setting.  It reminds me a little of Leiber's Lankhmar or Green's Haven.  It feels like there is a lot there to explore in future tales of Egil and Nix.  There is also some sense of the greater world outside Dur Follin, as Egil and Nix leave the city for a portion of the book.  The setting is ripe for many further adventures, and bears exploring.

I would highly recommend this book for any fans of sword and sorcery.  It is well worth your time.

I received a copy of this book from Angry Robot Publishing in exchange for an honest review.
Posted by Scott at 8:38 AM