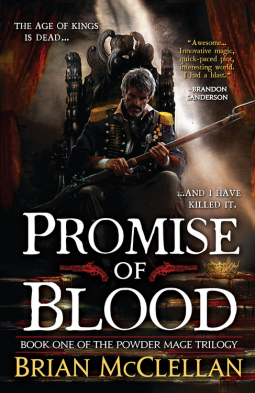 From the publisher: The Age of Kings is dead . . . and I have killed it.
It's a bloody business overthrowing a king...
Field Marshal Tamas' coup against his king sent corrupt aristocrats to the guillotine and brought bread to the starving. But it also provoked war with the Nine Nations, internal attacks by royalist fanatics, and the greedy to scramble for money and power by Tamas's supposed allies: the Church, workers unions, and mercenary forces.
It's up to a few...Stretched to his limit, Tamas is relying heavily on his few remaining powder mages, including the embittered Taniel, a brilliant marksman who also happens to be his estranged son, and Adamat, a retired police inspector whose loyalty is being tested by blackmail.

But when gods are involved...
Now, as attacks batter them from within and without, the credulous are whispering about omens of death and destruction. Just old peasant legends about the gods waking to walk the earth. No modern educated man believes that sort of thing. But they should...

Promise of Blood was part of a new wave of fantasy books labeled "Flintlock Fantasy".  Rather than taking place in a medieval setting, they are set in a time where gunpowder is prevalent (think 1700's).  This puts a new spin on the traditional fantasy trappings.

Promise of Blood starts out with a revolution among the people of Adopest, led by Field Marshall Tamas, a legendary military leader. It is similar to the French Revolution in that the nobility were taken out and beheaded in order to change the status quo and allow the people true freedom.  This part of the story is relatively minor, though it does springboard Tamas and Adopest into a conflict with the neighboring country of Kez.

The characters and magic, though, are what set this book apart.  There are three types of magic. The first is the Priviliged, a group of  sorcerer-types who have the ability to touch "the Else".  These are generally nobles or work for the nobles, particularly the King in the form of a Royal Cabal.  With the advent of gunpowder came the Powder Mages.  These are people who get a rush/power from gunpowder, allowing them to heighten their senses, ignite powder, and transfer the released energy to another object.  They are typically commoners.  There is a great divide and dislike between Powder Mages and Priviliged.  The final type of magic is the Knacked, people who have a relatively small ability, such as a photographic memory or the ability to go without sleep.

Tamas is the greatest Powder Mage, and with his fellow revolutionaries, including his son, he sets about trying to establish equality in Adopest.  The trouble is, there is a prophecy that declares that Kresimir (their god) will return if the King is deposed.  This will result in war, strife, and the destruction of Adopest.

The story follows several characters as they try to prevent this end, including Tamas, his son Taniel, and Adamat (an inspector tasked to find a traitor among Tamas's group). I particularly enjoyed the development of Taniel and Adamant and look forward to reading more about them.

While the story drags a little in the middle, the climax comes speeding ahead.  By the time the reader reaches the end, the stakes have been changed and many preconceived notions have been turned on their head.

I recommend this book to fantasy fans who want to try something new.  It may also appeal to fans of Brandon Sanderson, both in the uniqueness of the magic systems and due to the fact McClellan was a student of Sanderson's.

I received a review copy of this book from Netgalley and Orbit in exchange for an honest review.
Posted by Scott at 8:24 AM