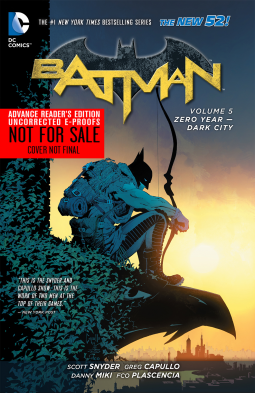 From the publisher: Before the Batcave and Robin, the Joker and the Batmobile ... there was ZERO YEAR.

The Riddler has plunged Gotham City into darkness. How will a young Dark Knight bring his beloved hometown from the brink of chaos and madness and back into the light? From the critically acclaimed, New York Times #1 best-selling creative team of Scott Snyder and Greg Capullo, BATMAN VOL. 5: ZERO YEAR--DARK CITY is the concluding volume to Batman's origin story, as you've never seen it before.

In the first story arc, Batman encounters a new villain known as Dr. Death.  Dr. Death has a connection to Bruce Wayne, and Bruce is determined to find and catch him.  Meanwhile, Commissioner Loeb and Det. Corrigan are determined to arrest Batman and take him off the street. This story is interesting, but it's biggest impact is as the set-up for the final arc.

The second arc is outstanding.  Riddler has taken control of Gotham; no one is allowed in or out of the city.  Bruce Wayne wakes up in strange surroundings after being out of action for some time and has to catch up with what Riddler is doing.  He and Gordon, with an assist from Lucius Fox (making his first appearance in the Batman's new history), must find Riddler and restore power to Gotham before time runs out.

The final part of the story has a nice coda, as Alfred imagines what life would be like for Bruce Wayne were he to stop being Batman.  It is a quiet tale, mixing hope and melancholy, and works as a brief pause in Batman's constant battle with darkness.

Synder is cementing himself as one of the legendary Batman writers, and Dark City is just further proof of his talent.  This was a great book, entertaining and suspenseful.  It also serves nicely to fill in gaps from Bruce Wayne's early time as Batman.  The characters of Riddler, Lt. Gordon, and Lucius Fox are fleshed out even more, helping to establish them as vital parts of the book.  In fact, I really liked Snyder's take on Riddler, who is too often played as a joke.  His intelligence and ruthlessness are brought to the forefront, making him a worthy opponent for Batman.

Once again, I highly recommend Batman Vol. 5: Zero City - Dark City.  This is a book worth reading, and Snyder continues his terrific storytelling.

I received a preview copy of this book from DC Comics and Netgalley in exchange for an honest review.
Posted by Scott at 10:07 AM