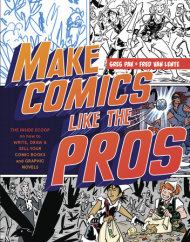 From the publisher: A step-by-step guide to all aspects of comic book creation--from conceptualization to early drafts to marketing and promotion--written by two of the industry's most seasoned and successful pros.

Discover the Secrets of Your Favorite Comic Book Creators

Do you want to break into the comics industry? There are many creative roles available—writer, penciller, inker, colorist, letterer, editor, and more. Each creator serves a vital function in the production of sequential art at companies such as DC, Marvel, Image, and Valiant. In Make Comics Like the Pros, veteran comics creators Greg Pak and Fred Van Lente team up with a who’s who of the modern comic book scene to lead you step-by-step through the development of a comic. With these two fan-favorite writers as your guides, you’ll learn everything from script formatting to the importance of artistic collaboration to the best strategies for promoting and selling your own sequential art masterpiece. Pak and Van Lente even put their lessons into practice inside the pages of the book—pairing with Eisner Award–winning cartoonist Colleen Coover (Bandette) to produce the swashbuckling, adventure comic Swordmaids, and giving you front row seats to their creative process. Make Comics Like the Pros provides all the answers you’ve been seeking to take your comic book–making dreams all the way to professional-level reality.

Make Comics Like the Pros, by Greg Pak and Fred Van Lente, is the latest in a recent string of books about creating comics.  Much like Brian Michael Bendis's Words for Pictures, this book is an excellent resource for the new and/or inexperienced comic creator.  Rather than focus on how to write or how to draw, though, Make Comics Like the Pros takes the reader through the process of creating and publishing a comic.  It is a very thorough examination, and appears to cover all the bases.

The book includes chapters on writers, artists, the rest of the creative team (inkers, letterers, colorists, and editors), how to pitch your idea, getting your comic out via print or digital publishing, and finding/reaching/ keeping your audience.  Throughout the whole book, Pak and Van Lente have put examples of what they are discussing, usually from one of their own books.  Several of their colleagues also contributed advice.  Additionally, many of the sections discussed have their own list of "commandments"; for example, Commandments for Editing, or Commandments for Lettering.  Each of these commandments contain excellent and well-thought out suggestions.  Finally, Pak and Van Lente, along with artist Colleen Coover, have created a new 8 page comic called "Swordmaids" to illustrate each step of the process.  I found this to be truly helpful, as the writers were following their own advice.

I received a preview copy of this book from the Blogging for Books program in exchange for an honest review.
Posted by Scott at 7:07 PM