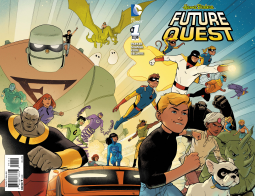 In FUTURE QUEST #1, when the adventurous and inquisitive Jonny Quest and his adoptive brother Hadji make a startling discovery in the swamplands of Florida, they are pulled into an epic struggle between the Space Rangers and a dangerous villain who threatens the galaxy. Now it’s up to the combined forces of Team Quest, Inter-Nation Security, Space Ghost, and a host of Hanna-Barbera’s greatest action heroes to stop him and save their universe!

Don’t miss the start of this new, monthly series that features character designs by comics superstar Darwyn Cooke and kicks off with an extra-sized story and a wraparound cover!

Jeff Parker's Future Quest series starts off with a bang, as Jonny Quest, Hadji, Race Bannon, and Dr. Quest are dropped into the middle of what appears to be an alien invasion of some sort. Throw in Birdman and the evil group F.E.A.R., and Parker has the makings for an awesome throwback/update of the classic Hanna-Barbera Saturday morning characters.

As Jonny and Hadji search out mysterious vortexes that are opening, Dr. Quest is explaining the danger to agents of Inter-nation, including Birdman. Agents of F.E.A.R. attack the boys, sending Birdman to the rescue. However, as they come upon the latest vortex, they glimpse images from other worlds, including what appears to be Space Ghost.

Parker sets the table with the opening issue of Future Quest, slowly introducing the characters. There are nods to the old, familiar cartoons, but the characters have a modern sensibility. Additionally, the idea of the vortexes seems to be setting up the idea of a shared universe between all the various heroes, including the Quest family, the Herculoids, Space Ghost, and multiple others. This series seems like it could be a lot of fun.

I recommend Future Quest #1 by Jeff Parker. This is a series that bears following, at least until the writer has a chance to reveal what his plans are. Fans of the old Hanna-Barbera cartoons should really enjoy Future Quest.