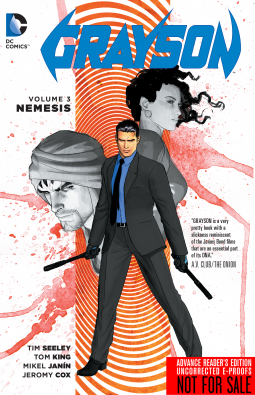 From the publisher: In this collection, Grayson faces some of his most difficult challenges! Not only must he take on Lex Luthor, and risks losing his position with Spyral, but Dick finds that in order to save Agent 1 he must face off with... himself! And who is the mysterious shadow leader behind Spyral, and what does he want with Dick? The super-spy finds himself in a clandestine hunt for the true identity of Agent Zero!

With Grayson Vol. 3: Nemesis, Tom King continues his entertaining look at Dick Grayson (formerly Nightwing and the first Robin) as a superspy. However, Grayson isn't sure if he's working for good or bad ends.

Coming on the heels of the last collection, Vol. 3 sees Dick Grayson's former partner, Matron, as the new head of Spyral. While he continues to work undercover for Batman, he also has to accomplish his missions. However, someone is killing rival spies in all the locations Grayson has been and in a manner consistent with Grayson's skills. In the course of attempting to uncover who is framing him, he runs afoul of Lex Luthor and discovers that Bruce Wayne has become an amnesiac and remembers nothing of his life as Batman. There is also a short adventure with Superman.

The two storylines in the Nemesis collection are both pretty good. The mystery of who is framing Dick is engaging, and goes with the general feel of the previous Spyral storylines. It is fun and entertaining, echoing the best action of James Bond-type movies, while keeping up with the humorous tone of Dick Grayson's character.

The more engaging and poignant story, though, is Dick's discovery of Bruce Wayne's condition. Dick makes a return to Gotham in order to see Bruce for himself, and while there he reveals to his fellow Bat-Family members that he is indeed not dead, like they believed. This results in some very emotionally charged exchanges. Dick's meeting with Damien Wayne (the current Robin, who was recently deceased himself) is particularly impactful. The relationship between these two characters has been the most interesting over the past several years, and it's nice to see the character development continue.

King's Grayson Vol. 3: Nemesis continues his excellent series. I highly recommend it all readers, but especially to fans of Dick Grayson, Batman, and spy stories.