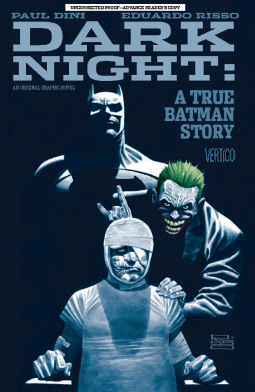 From the publisher: The Caped Crusader has been the all-abiding icon of justice and authority for generations. But in this surprising original graphic novel, we see Batman in a new light -- as the savior who helps a discouraged man recover from a brutal attack that left him unable to face the world.

In the 1990s, legendary writer Paul Dini had a flourishing career writing the hugely popular Batman: The Animated Series and Tiny Toon Adventures. Walking home one evening, he was jumped and viciously beaten within an inch of his life. His recovery process was arduous, hampered by the imagined antics of the villains he was writing for television including the Joker, Harley Quinn and the Penguin. But despite how bleak his circumstances were, or perhaps because of it, Dini also always imagined the Batman at his side, chivvying him along during his darkest moments.

DARK NIGHT: A TRUE BATMAN STORY is the harrowing and eloquent autobiographical tale of Dini’s courageous struggle to overcome a truly desperate situation. It is a Batman story like none other and one that will truly resonate with fans. Art by the incredible and talented Eduardo Risso (100 BULLETS, TRANSMETROPOLITAN).

Dark Night: A True Batman Story, by Paul Dini, isn't really a Batman story, or at least not in the sense of the typical comic book story. This book tells the story of how Dini was violently attacked and had his face smashed in during a mugging. It also follows on with his reaction and recovery from the attack, both emotionally and physically.

To understand how Batman plays a role in this book, Dini relates some of his background. He grew up a fan of comics and cartoons, particularly Batman. He went on to be a writer for many cartoons, but specifically for Batman: The Animated Series. Much of his inner monologue is a conversation with various cartoon/comic book characters, focusing on Joker and Batman.

Dini is very honest as he relates his story, almost tragically so. He lays bare his failed relationships and his social struggles. He is extremely transparent as he details his reactions immediately following his attack, and of the weeks and months that follow. Without giving away any details, Dini's story is very much a story about overcoming tragedy, and while his particular road to recovery (helped along by his cartoon friends) is unique, there is something universal and encouraging for those who face a similar road.