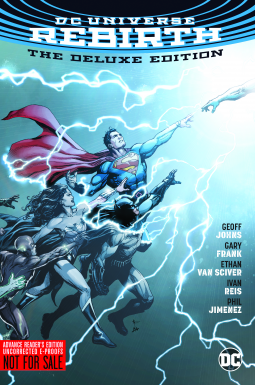 Wally West is trapped out of time and space, lost in the recesses of dimensional bleed due to the Flashpoint caused by his mentor Barry Allen. Drifting in this nothingness, only Wally—the man once known as Kid Flash and then the Flash—can see the mystery pervading the universe…someone has stolen ten years.

Wally must now return to Earth and the loved ones who have always acted as his lightning rod. Can he reach Linda Park—the woman who was once his wife and mother of his children—or Bruce Wayne—the Batman—the world’s great detective who might be able to unravel the mystery Wally sees before him. But no matter who he contacts, he always slips away, closer to nothingness.

The fate of the universe depends on Wally West’s REBIRTH…

The story that began one of the most critically acclaimed launches of all-time is here in DC UNIVERSE: REBIRTH DELUXE EDITION. Written by #1 New York Times best-selling author Geoff Johns (JUSTICE LEAGUE) with art from four of the industry’s greatest talents in Ivan Reis (AQUAMAN), Gary Frank (BATMAN: EARTH ONE), Ethan Van Sciver (GREEN LANTERN: REBIRTH) and Phil Jimenez (INFINITE CRISIS), this new hardcover graphic novel edition has ramifications that will reverberate through the DC Universe for years to come!

DC Universe: Rebirth is Geoff Johns's opening chapter in the great attempt to restore/reset/reboot DC's continuity once again. However, unlike previous attempts, Rebirth is acknowledging previous storylines, consequences, and ramifications. I believe this is a terrific way to go about this, as it doesn't once again erase years of continuity for new readers at the expense of long-time readers.

After the Flashpoint event and the New 52 universe, many DC characters were changed; some in a small way, some in major ways, and still others ceased to exist. Among this last group was Wally West, the original Kid Flash. Rebirth shows that Wally isn't really gone, he has just been caught in the speed force. This has given him perspective that the other heroes and villains don't have; he is aware that someone or something beyond just the Flashpoint has been manipulating their lives. He journeys to try and find someone who will remember him, thus freeing him from the speed force and beginning to restore what is missing from the DC universe.

Johns does a fantastic job of telling Wally's story. He checks in with many other characters, including Batman, the Atom, Aquaman, the new Wally West, Linda Park, and Barry Allen. Johns also begins to tie together all the various incarnations of continuity, and caps them off with what I believe is a terrific reveal that bears reading as the story goes forward.

This particular edition of DC Universe: Rebirth is the Deluxe Edition and is supposed to contain bonus material. However, my preview copy is identical to the original edition of Rebirth that was released previously. I did not receive any bonus material, and can therefore not review it.

I recommend Rebirth, by Geoff Johns, to fans of DC Comics, particularly fans who have been reading their books for ten or more years. This is a wonderful beginning to the effort to restore many, if not all, of our favorite characters and their continuity.