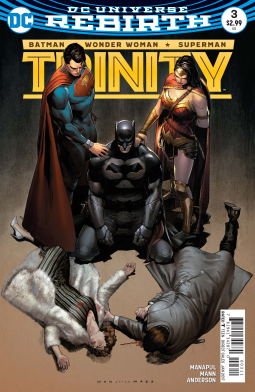 From the publisher: “BETTER TOGETHER” part three! The deadly White Mercy has Superman, Wonder Woman and Batman in its terrifying grasp! But who would dare to orchestrate this attack—and why? All will be revealed as the three most powerful heroes in the DC Universe fight for their very souls!

Trinity #3, by Francis Manapul, continues the Better Together arc, as Bruce Wayne and Diana Prince (Batman and Wonder Woman) journey on with a Clark Kent (Superman) they don't really know. However, unlike last issue's focus on Clark, his father, and Smallville, the current issue looks at Bruce Wayne, the aftermath of his parents' deaths, and Gotham. As events from their past play out, Bruce begins to see that something is just "off" about it, and thinks they are not really in the past.

Meanwhile, Lois Lane is trying to find/rescue the son she has with Clark. What she discovers puts our heroes' situation in a whole new light.

Once again, Manapul has done a fantastic job. This story continues to move right along, and the characters have a little more revealed each time. The art is terrific, as well.

I'm really enjoying this series. There is a fresh spin on the backgrounds of Batman and Superman, with Wonder Woman riding shotgun. The rediscovery of their pasts, and being forced to confront the events that forged them, is allowing the reader to experience some familiar events through a new lens. The side story with Lois Lane and Jon Kent is beginning to dovetail nicely with the main storyline. I look forward to seeing how it all turns out.

I highly recommend Trinity #3. The series as a whole is a fun and satisfying read. Pick it up if you're a fan of Batman, Superman, and Wonder Woman.