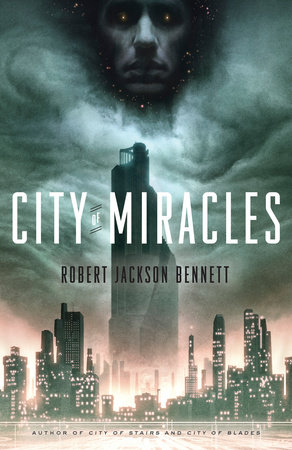 From the publisher: Revenge. It’s something Sigrud je Harkvaldsson is very, very good at. Maybe the only thing.

So when he learns that his oldest friend and ally, former Prime Minister Shara Komayd, has been assassinated, he knows exactly what to do—and that no mortal force can stop him from meting out the suffering Shara’s killers deserve.

Yet as Sigrud pursues his quarry with his customary terrifying efficiency, he begins to fear that this battle is an unwinnable one. Because discovering the truth behind Shara’s death will require him to take up arms in a secret, decades-long war, face down an angry young god, and unravel the last mysteries of Bulikov, the city of miracles itself. And—perhaps most daunting of all—finally face the truth about his own cursed existence.

City of Miracles, by Robert Jackson Bennett, is the third (and final, I think) book in the Divine Cities series. However, that being said, the books all stand on their own merits, and can be read as stand alone stories without anything being lost. Read together, they create one long story about a world dealing with magic gods, or Divinities. Additionally, each book focuses on a different character as the main protagonist, but there are callbacks to previous characters and events.

City of Miracles focuses on Sigrud je Harkvaldsson, a former spy (think black-ops type) who has lost basically everything that is important to him. When he hears about the assassination of his longtime partner and friend Shara Komayd, he drags himself from his self-imposed exile to use his particular set of skills (wreaking destruction) to find those responsible for her death and avenge Komayd. This act drags him into a much greater conflict than he could have imagined, as he discovers Komayd was involved with finding the children of the now (mostly) deceased Divinities, some of whom he and Shara were responsible for killing. He also discovers that there is a mysterious force looking to find the children for it's own nefarious purposes.

I really enjoyed this book. It is deep, full of emotions, and action-packed. It also takes it's time as Bennett very deliberately lays out his story at it's own pace. This is not a light, easy read, but it's not a hard read, either. It just requires the reader to focus and absorb what is happening. The plot always moves steadily along, interspersing moments of character interaction with mysteries revealed and set pieces full of action and violence. Throughout, the reader is given insight into a world with a much deeper history than it at first seems. Bennett's world building is spectacular, and I, for one, would really enjoy future stories set in this world, whether involving the same characters and time period, or others from the past or future.

Bennett's characters also shine. Sigrud je Harkvaldsson is a deeply complicated man, full of contradictions. He is contemplative, yet  extremely violent. He lives with sorrow and regret, yet makes many of the same choices that caused the sorrow and regret in the first place. He is a loner, but desires the company of others. In addition, former protagonists from the previous books, Shara Komayd and General Mulaghesh, make appearances. Also playing a major role in this story is Shara's adopted daughter, Tatyana. There is an innocence and depth to this character that perfectly complements Sigrud to form a very vibrant heart to City of Miracles. Finally, the antagonist (who I'll not name so as to avoid any potential spoilers) is a broken and sympathetic character.

I highly recommend City of Miracles by Robert Jackson Bennett. In fact, you should read the whole trilogy, just to spend time in Bennett's world and with his characters. This is a fantastic read and it is well worth your time.

I received a review copy of this book from the Blogging for Books program in exchange for an honest review.
Posted by Scott at 10:59 AM