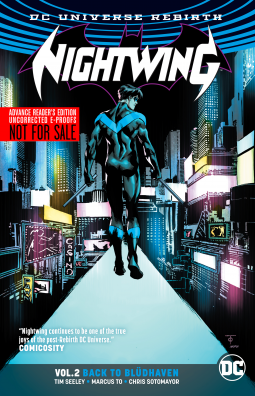 From the publisher: Dick Grayson's adventures as Nightwing continue in the second volume collecting the best-selling NIGHTWING series from DC Unverse Rebirth!

Former Robin and retired superspy Dick Grayson has returned to Gotham and stepped back into his life as Nightwing--the blue-and-black clad vigilante known for going where others won't. Fresh off a deep cover operation to infiltrate the Parliament of Owls, Nightwing must come to terms with secrets of his past that will forever change his destiny. Featuring appearances by Batman and Superman, this volume is packed with nonstop action and adventure!

Tim Seeley continues Nightwing's Rebirth adventures with Nightwing Vol. 2: Back to Bludhaven. Back in the day (pre-Flashpoint, pre-Rebirth, etc.), Nightwing moved to Bludhaven to escape from Batman's shadow. Bludhaven was basically a dirtier, more crime ridden neighbor to Gotham. Dick Grayson moved there, joined the police force, and had multiple adventures during the original run of Chuck Dixon's Nightwing comic. Many fans, myself included, have fond memories of this run. Cue Tim Seeley, who is (I believe) returning Nightwing to his roots after all he's gone through over the past several years and various reboots.

Dick moves to Bludhaven to rediscover himself, volunteering at a community center. There, he discovers that his supervisor, Shawn Tsang, is a former supervillain (Defacer), one whom he actually apprehended. As he patrols Bludhaven as Nightwing, Dick also runs into (and catches) another former Gotham villain (Gorilla Grimm). All of this leads to his discovery that there is a support group for former villains chased out of Gotham by Batman and Robin trying to go straight (an interesting concept). Over the course of this book, Nightwing attempts to uncover a deeper conspiracy and, with the help of the motley group of former villains, succeeds. Dick also finds himself in a complicated relationship with Shawn, and the final chapter of this volume addresses this.

Seeley is able to capture some of what makes Dick Grayson unique among the Bat-heroes: his humor and the sense of pleasure and sheer joy he takes in what he does. He has always been the balance to Batman's deep brooding and seriousness. The supporting characters have potential, but so far, they didn't really stand out. I'm curious to see how things progress with Shawn Tsang, though.

Seeley has done a fine job with Nightwing. However, I just found this collection to be okay. While he is getting back to some of the joy Dick has in being Nightwing, along with his sense of humor, this just didn't feel like a "deep" story. It's nice and fun, and there are some cute parts (Bludhaven attempting to use Nightwing's presence as a marketing gimmick). Overall, though, Nightwing Vol. 2: Back to Bludhaven was just a little better than average. I still really enjoy Nightwing and look forward to seeing where Seeley takes him. I would recommend this particular book to established fans, and I believe Nightwing's relocation to Bludhaven provides a nice jumping-on point for new readers.

I received a preview copy of this book from DC Comics and Netgalley in exchange for an honest review.
Posted by Scott at 5:33 PM