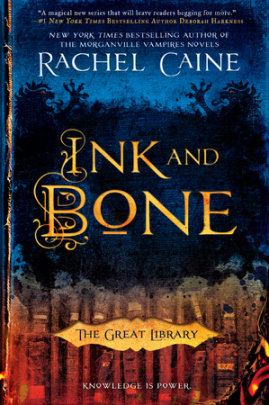 From the publisher: In an exhilarating new series, New York Times bestselling author Rachel Caine rewrites history, creating a dangerous world where the Great Library of Alexandria has survived the test of time.…

Ruthless and supremely powerful, the Great Library is now a presence in every major city, governing the flow of knowledge to the masses. Alchemy allows the Library to deliver the content of the greatest works of history instantly—but the personal ownership of books is expressly forbidden.

Jess Brightwell believes in the value of the Library, but the majority of his knowledge comes from illegal books obtained by his family. Jess has been sent to be his family’s spy, but his loyalties are tested in the final months of his training to enter the Library’s service.

When his friend inadvertently commits heresy by creating a device that could change the world, Jess discovers that those who control the Great Library believe knowledge is more valuable than any human life—and soon both heretics and books will burn.…

The concept for Rachel Caine's Ink and Bone (Book 1 in The Great Library series) is cool: The Great Library of Alexandria survived and is now the dominant force behind the structure of the world. Governments, etc. are all secondary to the Library, because the Library controls information. Everyone can access anything from the Library on their Codex (think tablet) but it is illegal to own any book. And the Library will do anything to hold on to it's power. At sixteen, students can apply to become an employee of the Library, but it is highly competitive. Meanwhile, Jess Brightwell, who comes from a family of smugglers (particularly rare books), is told by his father that he will be part of the next class trying to go into the service of the Library, where he can use his position to spy for his family. And then the fun starts.

First, there is a Harry Potter vibe when Jess begins his journey to Alexandria and his Library training. He takes a train to get there and meets a group of fellow students. There is Thomas, big, friendly, and intelligent; Kahlila, pretty, quiet, and brilliant; Glain (from Wales, and enemy of Jess's England), tall, strong, and fierce; and others. Once in Alexandria, they are taken to their home, Ptolemy House, where Jess meets his roommate Dario, rich, arrogant, and a rival to Jess. They also meet their instructor, Scholar Christopher Wolfe, who is strict, demanding, and distant. And that's where the Harry Potter similarities end. As the students begin their training, they are in competition for only six spots at the Library, so the tensions run high. They are also introduced to a late arrival to the class, Morgan, a pretty and mysterious girl who Jess is immediately drawn to. As the class is whittled down, the danger only grows, and not much is what it really seems to be, including the Library and those in charge of it.

Caine has done an excellent job with this first book in The Great Library series. The world building is terrific, as she has extrapolated what the world (particularly parts of Europe and Egypt) would be like if the Library of Alexandria hadn't been destroyed, but the rest of society had developed in much the same way as our world has (this is set in the near future). She has included several touches to deepen the world, such as a war between Wales and England, or a group known as the Burners who are in conflict and rebellion with the Library (particularly in America). There is also a form of magic, known as Alchemy in the book, that plays a rather important role.

Caine has also created some very engaging characters. Jess Brightwell is a great protagonist who finds himself in moral conflict and has to dig deep into himself to figure things out. Scholar Wolfe has layers that are revealed as the story progresses, and his motivations are slowly revealed. Jess's classmates grow in depth as they experience the Library training together and the high stakes of the story put the characters in very real peril. Very little is revealed about the leaders of the Library, like the Artifex Magnus, Obscurist Magnus, and the Archivist, but future volumes promise to add to them.

In addition to the main storyline, Caine has interspersed snippets known as Ephemera between each chapter. These short bits are based on communications between two characters and add details of a personal nature or focus on the Library's big picture ideas. For example, an early entry mentions Scholar Johann Gutenberg's new printing press invention, and how it needs to be hidden and he needs to be eliminated in order for the Library to keep its stranglehold on information. Each bit of Ephemera adds to the overall picture of what is going on.

I really enjoyed Ink and Bone, and upon finishing, I bought the second volume in the series. Rachel Caine's story and characters are engaging, the world of the Library is interesting, and the concept draws the reader in. I highly recommend this book. While the target audience is older teens, this can and should be enjoyed by adults as well. I'm looking forward to reading further installments in Rachel Caine's The Great Library series.

I received a review copy of this book from the Blogging for Books program in exchange for an honest review.
Posted by Scott at 9:23 AM