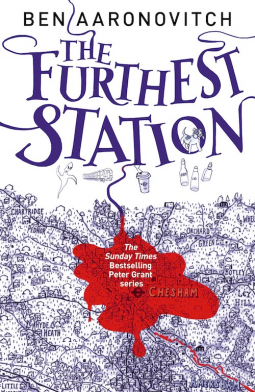 From the publisher: There have been ghosts on the London Underground, sad, harmless spectres whose presence does little more than give a frisson to travelling and boost tourism. But now there’s a rash of sightings on the Metropolitan Line and these ghosts are frightening, aggressive and seem to be looking for something.

Enter PC Peter Grant junior member of the Metropolitan Police’s Special Assessment unit a.k.a. The Folly a.k.a. the only police officers whose official duties include ghost hunting. Together with Jaget Kumar, his counterpart at the British Transport Police, he must brave the terrifying the crush of London’s rush hour to find the source of the ghosts.

Joined by Peter’s wannabe wizard cousin, a preschool river god and Toby the ghost hunting dog their investigation takes a darker tone as they realise that a real person’s life might just be on the line.

And time is running out to save them.

With this new novella, bestselling author Ben Aaronovitch has crafted yet another wickedly funny and surprisingly affecting chapter in his beloved Rivers of London series.

I've seen the Ben Aaronovitch's Rivers of London books and thought about picking one up many times, but just couldn't pull the trigger. When the opportunity to review The Furthest Station (a novella-length story in the same series) arose, I decided to give it a shot.

Peter Grant is a police officer who works in The Folly, the special unit that deals with the unexplainable or supernatural. His latest case has him looking for a ghost on the Tube. Grant undertakes the search with the help of his colleague Jaget Kumar from the British Transport Police. What they find is that there is a very real danger to someone's life, and the ghost on the Tube are just the beginning.

I enjoyed The Furthest Station. The characters are well developed and interesting. Peter Grant is a likable protagonist, with real flaws and an engaging personality. Kumar is an adequate companion, as well. It is easy to see that there is a history between the two. Other characters include Grant's teenage cousin Abigail and his boss Nightingale (who is a master practicer of magic). Abigail is somewhat of a prodigy who longs to learn magic and begin working with her cousin full time. She is very proficient with technology (as many teens are) and very intelligent. Abigail is a nice counterpoint to Grant. Nightingale fills the role of (somewhat) crusty mentor.

The mystery was engaging. It was nothing that seemed out of place in a book of this type, and didn't rely heavily on the use of magic. In fact, as far as police procedurals go, it was rather ordinary (this is not meant as a negative). I liked the fact that magic did not dominate the story but rather felt very natural and complimentary to it.

My only complaint was that I felt like I was missing out on some background or inside jokes, having not read any of the other books in the series. This is definitely not Aaronovitch's fault, but I found myself distracted by this from time to time. If The Furthest Station is meant as an easy entry point to the series (due to the length), then maybe those types of things should be explained or left out. However, I would guess readers who are already familiar with the series would enjoy those comments or events.

Overall, I thought The Furthest Station was entertaining. Ben Aaronovitch has created an interesting urban fantasy/mystery series with engaging characters. If as a reader, this fits in your sweet spot, it would be worth picking up and giving it a read. If you are already a fan, this is a must read.

I received a preview copy of this book from Subterranean Press and Netgalley in exchange for an honest review.
Posted by Scott at 8:19 AM