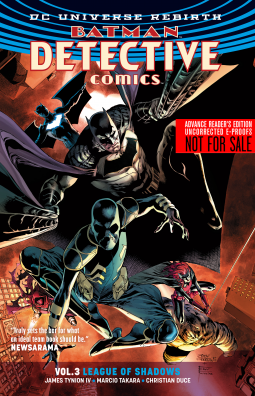 From the publisher: Batman's team of vigilantes continues to protect Gotham City in the next volume of the best-selling series, BATMAN: DETECTIVE COMICS VOL. 3: LEAGUE OF SHADOWS!

The next big DETECTIVE arc explodes here as the League of Shadows goes from mysterious rumor to deadly fact! With two new members of the team, Azrael and Batwing, will the Dark Knight's squadron of crime-fighters be able to discover the League's plan? And what deadly personal seceret will be unleashed on the team?

Batman: Detective Comics Vol. 3: League of Shadows, by James Tynion IV, is another in the line of excellent Batman books. Tynion builds on the idea of Batman forming a team of Bat-heroes to help him protect Gotham. Trained by Batwoman, this group, consisting of Clayface, Orphan, Azrael and Batwing (replacing Red Robin and Spoiler), is growing in confidence and ability. But, the League of Shadows may be too much for them.

When Lady Shiva and the League of Shadows come to Gotham, they plan to destroy it. Along the way, they run in to the remains of the Colony (a group run by Batwoman's father), Batman's new crew, and Ra's al Ghul. Cassandra Cain, aka Orphan, is particularly spotlighted. The story speeds along and comes to a fantastic and heartwarming conclusion.

I really liked this collection. Tynion has done an excellent job with the group, and in this book he focuses on Orphan. I thought he did a terrific job portraying a young girl with limited speaking skills (but strong non-verbal communication), raised to be an assassin with no remorse for killing, who desperately wants to be someone and something different. There are several heartbreaking scenes with Cassandra, yet some of the most heartwarming as well. I also found the League of Shadows, whom I had little previous knowledge of, to be a worthy opponent for Batman, and a worthy challenger to the better known League of Assassins. Lady Shiva is formidable and I look forward to future stories about her and the League.

Additionally, there are some interesting developments with Kate Kane (Batwoman) and her father. Tynion has done a nice job with Batwing and Azrael, who form an interesting partnership (science vs. faith). I also like the depth Tynion is adding to Clayface, who is no longer a one-note villain.

Batman: Detective Comics Vol. 3: League of Shadows, by James Tynion IV, is a terrific book. I highly recommend it to Batman fans. It is also a fine self-contained story (minimal knowledge of previous storylines required) and a good beginning point for new readers.

I received a preview copy of this book from DC Comics and Netgalley in exchange for an honest review.
Posted by Scott at 8:02 AM