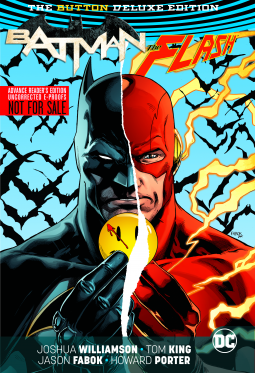 From the publisher: The Watchmen begin their invasion of the DC Universe here in this deluxe graphic novel BATMAN/THE FLASH: THE BUTTON, complete with a lenticular cover!

The cataclysmic events of DC UNIVERSE: REBIRTH #1 continue here! The Dark Knight and the Fastest Man Alive, the two greatest detectives on any world, unite to explore the mystery behind a certain blood-stained smiley button embedded in the Batcave wall. What starts as a simple investigation turns deadly when the secrets of the button prove irresistible to an unwelcome third party--and it's not who anyone suspects! It's a mystery woven through time, and the ticking clock starts here!

Written by breakout stars Tom King and Joshua Willamson, with art by Jason Fabok (JUSTICE LEAGUE) and Howard Porter (SUPERMAN), this crossover is one of the most-talked about events in all of comics. This deluxe edition graphic novel features a lenticular cover and collects BATMAN #21-22 and THE FLASH #21-22.

DC's Rebirth event was a way to restore/correct their comics to a more traditional history. There have been so many different world-shattering events, that the continuity spun out of control. So, Rebirth was to fix all of that, while still making the books friendly to new readers. One of the great mysteries hinted at in the book was the return of the Watchmen to the DC Universe.

Jump ahead to Batman/The Flash: The Button by Tom King and Joshua Williamson. Batman and the Flash are investigating a mysterious smiley face button (with a blood stain on it) that showed up in the Batcave during the Rebirth special last summer. The button appears to be the same one the Comedian (of Watchmen fame) wore.  In the course of their investigation, Batman is confronted by Reverse-Flash, who grabs the button for the power it's emitting. Chaos ensues from there, with time travel, alternate universes/histories, and deaths all around them. And at the end, some questions are answered, but more are asked, as this story leads into the Doomsday Clock event (another Watchmen reference).

I enjoyed this book, and have liked seeing this mystery unfold. I'm one of those readers who didn't care for the New 52 or the results of Flashpoint, and I like the creativity that DC is using to restore some of the traditional history to it's line-up without erasing (again) even more continuity. Whether you are a fan or not, I also think using the Watchmen and bringing them into the mainstream DC Universe is a clever idea. King and Williamson have done a nice job with this story, revealing what they can, yet making it very personal to both Batman and Flash.

I really enjoyed Batman/The Flash: The Button, by Tom King and Joshua Williamson, and recommend it to fans of the Rebirth event. I look forward to seeing where this story continues to go in the future.

I received a preview copy of this book from DC Comics and Netgalley in exchange for an honest review.
Posted by Scott at 4:32 AM