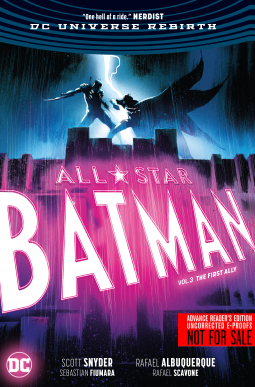 From the publisher: #1 New York Times best-selling BATMAN author Scott Snyder's ALL-STAR BATMAN continues with a new volume featuring new stories drawn by some of the top artists in all of comics!

In the third volume of Scott Snyder's best-selling ALL-STAR BATMAN, a rotating team of all-star artists join the Bat-scribe to tell tales featuring some of Batman's most deadly foes! For more than 75 years, Batman has been one of the most widely recognized and revered superheroes in all of comics. But what would the Dark Knight be without an equally iconic roster of villains to keep him fighting all these years?

When the Dark Knight is taken down by a new enemy whose attacks he cannot counter, he uncovers a plot spanning generations...whose mastermind might be one of his closest allies! But who is the First Ally?

In ALL-STAR BATMAN VOL. 3, Scott Snyder is joined by Rafael Albuquerque and other superstar artists to pit Batman against his darkest enemies. Collects issues #10-14.

Scott Snyder delivers with All-Star Batman Vol. 3: The First Ally. One of my favorite things about Snyder's Batman stories is how he is able to new ideas and characters to Batman's past while making it seem like they'd been there all along. That is what he's done with The First Ally, only in this case, he's added to Alfred Pennyworth's past.

Batman tracks Hush to Miami to try and acquire the Genesis Engine before Hush, Penguin, Black Mask, and Great White can get there hands on it. As Batman nears his goal in a confrontation with the descendants of actual pirates, he encounters an unexpected new foe: a Black Knight, or Nemesis, and his handler, a man named Briar. While Nemesis is new to Batman, he is familiar to Alfred, who at one point in his life was on the path to be a Nemesis Black Knight. As the struggle for the Genesis Engine heats up, Alfred will revisit a part of his past he thought was over.

There was a lot to like about the First Ally storyline. I really liked the focus on Alfred, who narrated the entire story. Snyder alternates between Alfred's past as an SAS agent and his present as Bruce Wayne's ally. We are given a very open, and interesting, look into Alfred's relationship with his father and some unresolved feelings that led him to join the military. The confrontation between Batman and Briar and his Black Knight dovetails with Alfred's training in the Nemesis program. Additionally, the modern pirates tie in with Alfred's story, as well, which ends up bringing The First Ally full circle. All of these things made for a rich, deep story, one which was really enjoyable. I've found that often times my favorite Batman stories are the ones that deepen the characters that surround Batman, rather than just focus on Batman himself. This is what Snyder did with The First Ally, and it paid off.

Along with The First Ally arc, there was a back-up story arc called Killers-in-Law that focused on Bruce Wayne going undercover in Russia as a part of a Russian crime family known as the Myasniks. Batman wants to stop a shipment of weapons from making their way to Gotham for the Russian crime families there to start a war with the Falcone family. While in Russia, Bruce makes the acquaintance of Vik Myasnik, who will become known as Killer Queen. Snyder makes this an interesting story with Batman out of his normal element, and also finds a way to tie it into his main First Ally story arc.

Overall, I found All-Star Batman Vol. 3: The First Ally by Scott Snyder to an excellent read. I highly recommend this story of fathers and sons, especially to Batman fans who like their supporting cast to be rounded out with depth of character.

I received a preview copy of this book from DC Comics and Netgalley in exchange for an honest review.
Posted by Scott at 6:42 AM