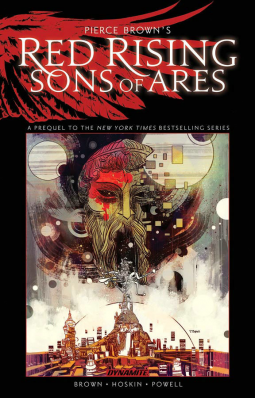 From the publisher: From the world of the best-selling YA series Red Rising comes a story of love and loss and rage! In the future, when mankind has spread across the stars, the hierarchy of man is dictated by the color of one's caste. The Golds rule all, but what will happen when one falls for a lowly Red? See how a forbidden love will set the course of events for the future and lead to the formation of the formidable Sons of Ares!

A couple of years ago, I was clued in to Pierce Brown's novel Red Rising. I flew through it, and then read the sequels when they were released. Brown has succeeded in creating interesting characters, a fantastic political system, and a believable expansive universe. So, I was excited to see that there would be a prequel of sorts, only as a comic book. When the opportunity came to read and review Red Rising: Sons of Ares, I jumped at the chance.

In the original Red Rising trilogy, society is based on a caste system that is represented by colors; red is the bottom (manual laborers, etc.) while gold was at the top (political and physical elite). A rebel group (or terrorist group, depending on your point of view) known as the Sons of Ares was in conflict with the ruling classes. They did not like the oppression of the various groups of "low colors". It is this group that recruits Darrow, the hero of the original trilogy. In this Sons of Ares graphic novel, the origin of the group and how their leader becomes Ares is revealed. For the sake of readers new to Red Rising, I won't reveal Ares's real name, but his story is really interesting.

Ares is a gold who is never considered quite good enough. Think of "old money" families not accepting "new money". However, he is relentless and loyal to a fault, until his best friend turns away from him. Out of spite, Ares signs on with another family, which leads him to meet his true love; the only problem is she is a red. Ares's story shows how he very delicately maneuvers the rigid political system while trying to keep his family a secret. When he is betrayed again, things get personal, and the Sons of Ares are born.

I really enjoyed this book. The characters are fascinating, especially Ares. And while I knew who he was already, having his story told and his motivation for rebelling revealed was really satisfying. Brown has done such a wonderful job of creating three dimensional characters; their actions, decisions, loves, and consequences all ring true, and their is a depth to them that just adds to the overall engagement with, and enjoyment of, the story. Rather than an afterthought or an add-on, Sons of Ares just feels like more of the Red Rising trilogy. The tone and mood are seamless, and this book just adds to the mythology and history Brown has already established.

I highly recommend Red Rising: Sons of Ares by Pierce Brown. If you're a fan of the original trilogy, this is a must. If the premise sounds intriguing to you, then this is a fine place to start; although, starting with Sons of Ares will spoil one of Brown's reveals in the trilogy. Anyway you slice it, Sons of Ares is a great book.

I  received a preview copy of this book from Dynamite Entertainment and Netgalley in exchange for an honest review.
Posted by Scott at 10:31 AM