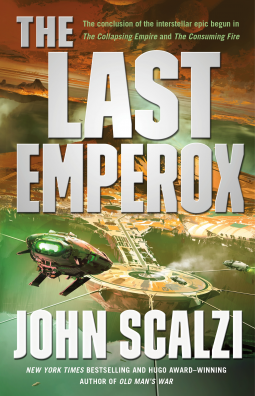 From the publisher: The Last Emperox is the thrilling conclusion to the award-winning, New York Times and USA Today bestselling Interdependency series, an epic space opera adventure from Hugo Award-winning author John Scalzi.

The collapse of The Flow, the interstellar pathway between the planets of the Interdependency, has accelerated. Entire star systems—and billions of people—are becoming cut off from the rest of human civilization. This collapse was foretold through scientific prediction . . . and yet, even as the evidence is obvious and insurmountable, many still try to rationalize, delay and profit from, these final days of one of the greatest empires humanity has ever known.

Emperox Grayland II has finally wrested control of her empire from those who oppose her and who deny the reality of this collapse. But “control” is a slippery thing, and even as Grayland strives to save as many of her people form impoverished isolation, the forces opposing her rule will make a final, desperate push to topple her from her throne and power, by any means necessary. Grayland and her thinning list of allies must use every tool at their disposal to save themselves, and all of humanity. And yet it may not be enough.

Will Grayland become the savior of her civilization . . . or the last emperox to wear the crown?

The Last Emperox is the final book in John Scalzi's Interdependancy trilogy. It brings to a conclusion the storyline begun in The Collapsing Empire and continued in The Consuming Fire. So, is it successful at resolving the story? The short answer is yes. The long answer is yes, too, but maybe a little more complicated than that.
When The Last Emperox begins, the empire of the Emperox Grayland II (also know as Cardenia) is in the midst of fragmenting due to the collapse of the Flow streams which provide a way to travel between star systems. As detailed in the first two books, this will isolate each system, eventually resulting in the deaths of the great majority of humanity as they know it. Grayland is continuing her attempts to discover a way to save everyone before all systems are cut off from each other. Assisting her in this task is her boyfriend/chief Flow expert Marce Claremont, the sentient starship Chenevert, and the foul-mouthed and sex-crazed but very calculating Kiva Lagos. In the meantime, she continues to have to deal with attempted coups and assassination attempts from various factions, including her own noble family (the Wu's) and her perpetual foil, Nadashe Nohamapetan. Political maneuverings, scientific discoveries, and an ending I did not see coming all come together to make this an exciting story and a satisfying conclusion to the series.
As in previous books, Scalzi has written some interesting and engaging characters. And by this time, the readers are very familiar with their quirks and personalities. They continue to grow and develop, particularly Kiva Lagos and Cardenia/Grayland II. Both characters have nice arcs that you can trace through the other two books, and the conclusion for each feels genuine, if a touch unexpected. I also enjoyed reading about Marce and seeing him take on a bit larger role. Scalzi's humorous writing style mixed with sarcasm is evident in the characters, which is something I enjoy when reading (I don't really like it when everything has to be Serious all the time).
My only complaints about The Last Emperox are the same I had for the previous two books. First, every few chapters, there seems to be a chapter that is a huge information dump, tons of exposition with little dialogue. For me, these chapters would bring my reading momentum to a screeching halt, as the speed and flow of the story would come to a near halt. Additionally, there is a lot of cursing, particularly the "F" word. While it is part of a character's personality to use this word so much, it seems a little excessive to me. Finally, the amount of sex in the book can be gratuitous, although not graphic. I will say that of the three books, this one had the least amount of sex in it.
Overall, I enjoyed The Last Emperox, and the Interdependancy series as a whole. It was relatively fast paced and engaging, with interesting characters and some newer takes on space travel and science concepts. John Scalzi did a terrific job of telling the story he intended to tell and resolving it well in The Last Emperox. He also left enough threads left untied that he could easily revisit characters, ideas, of the Interdependancy universe without messing with this trilogy or undoing the choices in this series. I would recommend The Last Emperox (and the series) to Scalzi fans, general science fiction fans, and readers who like a bit of humor and sarcasm in their stories.
I received a preview copy of this book from Tor and Netgalley in exchange for an honest review.
Posted by Scott at 12:03 PM