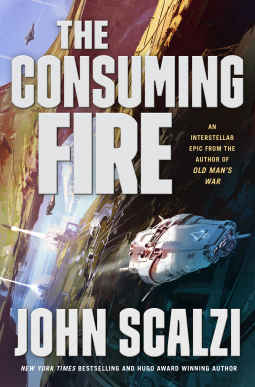 From the publisher: New York Times Best Seller
USA Today Best Seller
io9's New Sci-Fi and Fantasy Books You Need to Put On Your Radar This Fall
Kirkus' SF/F Books to Watch Out for in 2018
Popular Mechanics Best Books of 2018 (So Far)
Goodreads' Most Anticipated Fantasy and Science Fiction Books

The Interdependency—humanity’s interstellar empire—is on the verge of collapse. The extra-dimensional conduit that makes travel between the stars possible is disappearing, leaving entire systems and human civilizations stranded.

Emperox Grayland II of the Interdependency is ready to take desperate measures to help ensure the survival of billions. But arrayed before her are those who believe the collapse of the Flow is a myth—or at the very least an opportunity to an ascension to power.

While Grayland prepares for disaster, others are prepare for a civil war. A war that will take place in the halls of power, the markets of business and the altars of worship as much as it will between spaceships and battlefields.

The Emperox and her allies are smart and resourceful, as are her enemies. Nothing about this will be easy... and all of humanity will be caught in its consuming fire.

The Consuming Fire, book 2 in the Interdependency series by John Scalzi, picks up fairly close to where the first book, The Collapsing Empire, left off. And, it basically jumps right into the action, as Emperox Grayland II tries to shepherd all of humanity through the upcoming collapse of the Flow streams and the end of civilization as they've known it for the past one thousand years.

While The Consuming Fire is a space epic type of book, it really isn't concerned so much with battles and such; it's more focused on saving humanity and the political battles that Grayland II is dealing with. These schemes are interesting in and of themselves, as it's sometimes hard to know who to really trust, and Scalzi plays his cards very close to the vest, not revealing everything until the climax of the story. The other part of this book that I found really interesting was Marce Claremont's arc. I don't want to spoil anything, but I'll say that it reminded me a bit of the Alex Benedict/Chase Kolpath books by Jack McDevitt. The two threads (Grayland's and Marce's) dovetail nicely together.

Scalzi does a fine job with character development, as he mostly focuses on the same point of view characters we followed in the first book. Grayland II continues in her acclimation to being Emperox, becoming more formidable and confident. Marce Claremont sees his role expand and become extremely important. Nadashe Nohamapetan shows up again, and continues to act as a foil for Grayland, although in a different capacity. Kiva Lagos, and her foul mouth, are once again embroiled in conflict with the House of Nohamapetan. Additionally, Scalzi introduces or expands on some characters who were not really a part of The Collaspsing Empire: Countess Nohamapetan, Archbishop Korbijn, Lord Terran, and more members or employees of the Houses of Wu and Nohamapetan. All told, this is a varied and interesting group of characters whose interactions make for an enjoyable read.

The plot of The Consuming Fire is constantly moving forward, and Scalzi fits all the myriad pieces together very well. A little more than halfway through, there is a big reveal that propels the story forward at breakneck speed, and the conclusion, while a fine ending to this book itself, totally expands the scope of where the final book can take the story of Grayland II and the Interdependecy's quest to save themselves from disaster. It wasn't something I saw coming, but all the seeds are there. As far as negatives, I have a couple that are more along the lines of personal preferences: Scalzi's characters use the F-word a lot, enough where it is a little distracting to me when I'm reading; sex is also a driving force for some of these characters, and while not graphic by any means, it seems a bit superfluous at times; and finally, there are a few chapters were it is one paragraph of exposition after another, and while these are necessary, they slowed me down after chapters that pushed the plot forward with snappy dialogue and humor.

Overall, I would recommend The Consuming Fire by John Scalzi. It's both a terrific sequel and a fine book in its own right. Scalzi has written a quickly moving, engaging story with humor and well-rounded characters. I'm looking forward to reading the conclusion, The Last Emperox, in the near future.

I received a review copy of this book from Tor Books and Netgalley in exchange for an honest review.
Posted by Scott at 1:44 PM