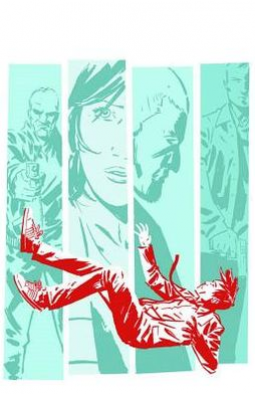 From the publisher:  Reconnect agents Mark and Seth go back in time to save people from their untimely demise — for a fee.

But, when a rescue mission goes awry, both agents find themselves trapped in the past and on the run from both the FBI, who want to jail them, and their own employers who want to kill them to protect their own dark and deadly secrets.

Comeback, by Ed Brisson, is a pretty cool story.  It is reminiscent of the movie Looper, in that it involves an illegal time-traveling group that uses the technology for monetary gain.

Mark and Seth are agents for Reconnect, a company who will save your loved one from an untimely death for a large sum of money.  To do that, they utilize time-travel.  They also seem limited to using it only within a certain amount of days from the death (that part is never fully explained).  When their latest rescue starts to go sideways, Seth runs into a future version of himself, who tells the younger version what Reconnect is really up to.  Simultaneously, the reader discovers that the FBI has a time-travel department, which is investigating several anomalies created by Reconnect.  In the course of the investigation, the agents run in to Mark, Seth, and Seth.  What follows is a highly entertaining thriller/mystery/noir story that shows the "consequences" of messing with the time-stream.  The time-travel rules are very consistent and there are several cool examples of how the paradoxes created by traveling through time can affect those doing the traveling.

The character development is slight, as the focus is on the twisting and turning plot. However, the characters of Seth, Mark, and Owen provide enough interesting interactions to interest the reader.

The art, by Michael Walsh, is very spare, which adds to the pulpy feel of the story.

I was very entertained by Comeback, and couldn't help but picture it as a movie, much like the previously mentioned Looper.  If you are a fan of noir, pulp, sci-fi, thrillers, or some combination of those, you'll really enjoy this book.

I received a review copy of this book from Netgalley and Image Comics in exchange for an honest review.
Posted by Scott at 8:24 AM