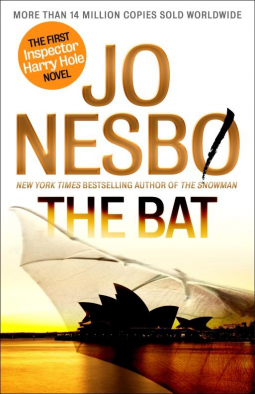 From the publisher: The electrifying first appearance of Jo Nesbø’s detective, Harry Hole.
Inspector Harry Hole of the Oslo Crime Squad is dispatched to Sydney to observe a murder case.  Harry is free to offer assistance, but he has firm instructions to stay out of trouble. The victim is a twenty-three year old Norwegian woman who is a minor celebrity back home. Never one to sit on the sidelines, Harry befriends one of the lead detectives, and one of the witnesses, as he is drawn deeper into the case.  Together, they discover that this is only the latest in a string of unsolved murders, and the pattern points toward a psychopath working his way across the country. As they circle closer and closer to the killer, Harry begins to fear that no one is safe, least of all those investigating the case.

The Bat is was my introduction to Jo Nesbo and his series detective Harry Hole.  I'd heard some good things about the series, and having read the Wallendar series by Henning Mankell, I fully expected another excellent, bleak and moody Scandinavian mystery.  I was only partially right.

The Bat, even though it is written by a Norwegian author and stars a Norwegian police detective, takes place in Australia (mostly in Sydney). I hadn't realized this was the setting, and I found it an interesting place to start a series.  That did away with the bleakness I was expecting.  However, The Bat was both moody and excellent.

Harry Hole is a fascinating character, and in the vein of Harry Bosch, he is ripe for further development.  There are layers to the character that are slowly revealed, deepening the intrigue and adding to the mystery.  And like all great protagonists, Harry Hole is a flawed individual; he is a recovering alcoholic, amongst other personal problems.

The mystery is involving, with many twists and turns.  Harry and his Australian "partner", Andrew Kensington (an Aborigine), track every lead and run across many colorful people in their investigation of the murdered girl.  A cross-dressing clown, an Aborigine boxer, a drug-dealer, a homeless man, and a beautiful Swede (whom Harry falls for) are among the strong supporting cast.  Interspersed with the investigation are tidbits about Australia's complicated social history, which add to the atmosphere.

Finally, Nesbo's writing style was quick and crisp. There were never any large info-dumps, and the chapters moved quickly.  The dialogue was sharp and believable.

I really enjoyed this novel and will definitely be picking up other books in this series. Like Michael Connelly's Harry Bosch series, the mysteries run a close second to discovering more of the unfolding life of Harry Hole. I highly recommend this book to mystery lovers.

I received a review copy of this book from Knopf Doubleday Publishing Group and Netgalley in exchange for an honest review.