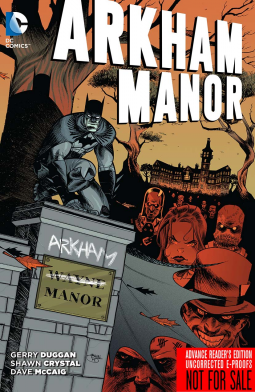 From the publisher: When catastrophe strikes Arkham Asylum, where will Gotham City house the world's most dangerous criminals, and when inmates are found murdered, what is Batman prepared to do in search of justice? Arkham's madness comes home in ARKHAM MANOR! A bold new collection brought to you by Gerry Duggan (Deadpool, Nova) and Shawn Crystal (Deadpool, Wolverine and the X-Men).

The new series Arkham Manor, by Gerry Duggan, springs out of the pages of Batman Eternal. The verdict? It's fantastic. Arkham Asylum blew up, setting free a number of prisoners and leaving the rest without a place to be incarcerated/rehabilitated. The mayor's solution? Use the power of eminent domain to seize Wayne Manor from a recently disgraced Bruce Wayne (see Batman Eternal Vol. 2).  Now Batman's headquarters are beneath the residence of many of his worst and dangerous opponents. When an inmate is murdered, Batman assumes an identity in order to be admitted as a patient. What a great set up for an entertaining Batman story.

Duggan does a wonderful job setting the mood and tone. He writes Batman as a vengeful detective who is protecting his home, literally and figuratively. While there are certainly a group of traditional villains in this story, the main action involves two new characters: Seth Wickham and a man referred to as the Spider. Throw in a Joker cameo as a lead-in to events coming up in the Batman books, and you have one great book.

Additionally, Shawn Crystal's artwork is the perfect compliment to Duggan's writing. They are complimentary and go far to creating the atmosphere of Arkham Manor.

I highly recommend Arkham Manor by Gerry Duggan, particularly to fans of Batman with a little bit of an edge.

I received a preview copy of this book from DC Comics and Netgalley in exchange for an honest review.
Posted by Scott at 6:46 AM