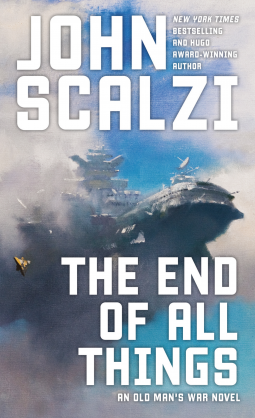 From the publisher: Hugo-award winning author, John Scalzi returns to his best-selling Old Man's War universe with The End of All Things, the direct sequel to 2013's The Human Division.

Humans expanded into space…only to find a universe populated with multiple alien species bent on their destruction. Thus was the Colonial Union formed, to help protect us from a hostile universe. The Colonial Union used the Earth and its excess population for colonists and soldiers. It was a good arrangement...for the Colonial Union. Then the Earth said: no more.

Now the Colonial Union is living on borrowed time--a couple of decades at most, before the ranks of the Colonial Defense Forces are depleted and the struggling human colonies are vulnerable to the alien species who have been waiting for the first sign of weakness, to drive humanity to ruin. And there's another problem: A group, lurking in the darkness of space, playing human and alien against each other--and against their own kind --for their own unknown reasons.

In this collapsing universe, CDF Lieutenant Harry Wilson and the Colonial Union diplomats he works with race against the clock to discover who is behind attacks on the Union and on alien races, to seek peace with a suspicious, angry Earth, and keep humanity's union intact...or else risk oblivion, and extinction--and the end of all things.

Warning: My copy of this preview included the first story in the collection, The Life of the Mind, and the second, The Hollow Union. I will be basing my review on these two stories.

The Life of the Mind, the first story in John Scalzi's new collection The End of All Things, picks up where the last book in the Old Man's War series, The Human Division, left off. The main character is a pilot named Rafe Daquin. He is, quite literally, a brain in a box. How he got there and what he does is the crux of the story.

Rafe makes for a fascinating point of view character, as he is rather limited in what he can do and where he can go due to his being just a brain. However, he is connected to his ship, the Chandler. He is a slave to the Rraey, an alien race who opposes the Colonial Union as a member of the group called Equilibrium. Daquin's resourcefulness and intelligence make him an ideal narrator, and his desire for revenge serves to propel the plot along. There are also some appearances by some of the major characters in previous stories, which helps tie in Rafe's tale to the greater whole.

Scalzi's writing style is in full force here, with Daquin's humor and sarcasm, along with some fun reveals.

The second story, The Hollow Union, focuses on the Conclave, a coalition of alien worlds in opposition to the Colonial Union. This story runs somewhat concurrently to The Life of the Mind in the Old Man's War timeline.

The point of view character in The Hollow Union is Hafte Sorvalh. She is the second in command (almost like a chief of staff) to General Tarsem Gau, the leader of the Conclave. The story consists of Sorvalh dealing with several disputes of a more political nature, including what to do with Earth, who isn't fond of the Colonial Union but is still full of humans, much to the chagrin of many of the Conclave member races. As a conspiracy reveals itself, Sorvalh is put in a precarious position.

Again, Scalzi strays from the typical human narrator, but his style works very well with this. As in The Life of the Mind, the uniqueness of his protagonists, combined with their very specific voices, is one of the best parts of his writing. Scazi also does a great job building up suspense and paying it off without the reader feeling cheated or talked down to.

I would highly recommend The End of All Things to readers/fans of John Scalzi's Old Man's War series. It isn't really the best place to jump into the series, but if you're a fan of what came before, you'll love this book too.

I received a preview copy of this book from Tor/Macmillian in exchange for an honest review.
Posted by Scott at 6:51 AM