Gotham by Midnight Vol. 1: We Do Not Sleep by Ray Fawkes - Book Review 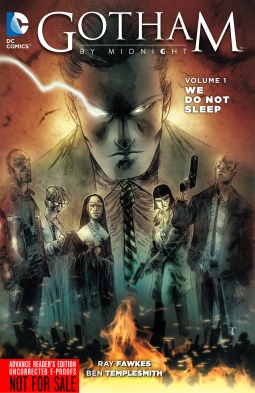 From the publisher: Spinning out of Batman Eternal, Detective Jim Corrigan aka The Spectre stars in his very own series Gotham By Midnight!

Normally Batman and the other caped protectors of Gotham have the streets of the city covered. But when monsters, ghosts and other supernatural beings enter the mix, even the Dark Knight needs help. Enter Detective Jim Corrigan aka the Spectre to prowl the streets of Gotham, solving the unsolvable supernatural crimes the city can muster. Collects Gotham By Midnight #1-5.

As a fan of Batman Eternal, I decided to give Gotham by Midnight, by Ray Fawkes, a read. It was a pretty cool book.  Vol. 1: We Do Not Sleep details Det. Jim Corrigan, aka The Spectre, and a small group of investigators (including a nun, a female detective with a mysterious power, a forensic investigator, and the Lt. in charge) as they take on the supernatural cases that arise in Gotham. This Midnight Squad (as they are known) begins with an investigation into a couple of missing girls. With an Internal Affairs sergeant riding along, we slowly begin to see a new side of Gotham. Following this thread, they discover a threat that reaches back to the very origins of the city of Gotham.

The art, by Ben Templesmith, is hard to describe, but it perfectly suits the eerie tone of the book. Nothing is quite straight and easily interpreted. Additionally, the colors, which almost seem washed out, add to the feeling of creepiness surrounding the cases.

This is a very new take on Gotham, and I enjoyed it. It leans towards horror, but stays grounded in who the characters are, particularly the Spectre. With brief cameos from Batman, the story also kept itself in the general continuity of Batman Eternal's world.  I recommend Gotham by Midnight Vol. 1, by Ray Fawkes, to fans of the spooky side of Batman.