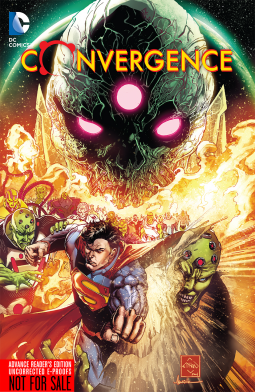 From the publisher: Once, there were Infinite Earths. Untold timelines. Innumerable Elseworlds. Then there came a Crisis…a Zero Hour…a Flashpoint. Worlds lived. Worlds died. Now they all must fight for their future! The evil alien intelligence known as Brainiac has stolen 50 doomed cities from throughout time and space and brought them to a place beyond the Multiverse—a sentient planet of his own design, a world with the power of a god. As heroes and villains from dozens of worlds battle each other for their very existence, it’s up to a ragtag band of warriors from a slain Earth to put an end to this threat that bends the Multiverse to its will. Reality itself hangs in the balance… This is it! The entire DC Universe from the dawn of time through the New 52 stars in CONVERGENCE — an unprecedented event that brings together your favorite characters from every era and series. Whether familiar or forgotten, none of them will ever be the same! Existence comes to end and a beginning with writers JEFF KING (USA’s White Collar), SCOTT LOBDELL (SUPERMAN: DOOMED), and DAN JURGENS (BATMAN BEYOND), and artists CARLO PAGULAYAN (Incredible Hulk), STEPHEN SEGOVIA (GREEN LANTERN: NEW GUARDIANS), ANDY KUBERT (DAMIAN: SON OF BATMAN), and ETHAN VAN SCIVER (GREEN LANTERN: REBIRTH). Collects CONVERGENCE #0-8.

I generally enjoy the big comic event stories every year, so I was looking forward to reading Convergence by Jeff King. The description of including various characters from all of DC's history in one story sounded pretty cool. It also sounded like an opportunity to get away from the New 52 continuity and return many of the characters to their more classic iterations.  I mean, DC started this whole thing with the Crisis on Infinite Earths storyline, and I was hoping for something along those lines.

However, I found Convergence kind of a mess.  To start with, the main characters were a few leftover heroes from the New 52 Earth 2, including Green Lantern, Batman (Thomas Wayne), Dick Grayson, Superman (Val-Zod), the Flash, and Yolanda. Other than a nice meeting between two different Batmen (both Thomas and Bruce), there was not really any emotional investment in what happened to these characters.  Secondly, the story itself was hard to follow. First they were fighting Brainiac. Then Telos. Then Deimos. Then Brainiac again.  Very little in the way of motivation was given for any of the villains.  Thirdly, there were major gaps in the story.  I'm not sure, but it seemed that there were multiple tie-in stories to Convergence that filled a bunch of plot holes.  Because I didn't read these, I found myself being jumped around a lot without much explanation as to what was happening, or what happened elsewhere. Finally, I'm not really sure what the end result of this "multiverse changing event" was. Are we back to the old continuity? Is the New 52 still going on? Is there something all together new happening? It's really not clear.

All told, I was disappointed with Convergence. An event comic needs to have a self-contained story. The tie-ins should support the story, but not be essential. To this end, the Convergence comics should probably be collected into a book with the tie-ins included, and not on their own.  Because of all this, I can't really recommend Convergence. I suppose die-hard DC Comics readers may enjoy it, but I sure didn't.

I received a preview copy of this book from DC Comics and Netgalley in exchange for an honest review.
Posted by Scott at 7:53 AM