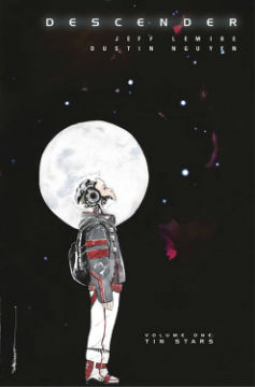 From the publisher: Young Robot boy TIM-21 and his companions struggle to stay alive in a universe where all androids have been outlawed and bounty hunters lurk on every planet. Written by award-winning creator, Jeff Lemire, Descender is a rip-roaring and heart-felt cosmic odyssey. Lemire pits humanity against machine, and world against world, to create a sprawling epic. Collecting issues #1-6 of Jeff Lemire (Sweet Tooth, Trillium) and Dustin Nguyen's (Little Gotham) critically acclaimed, bestselling new science fiction series!

I found Jeff Lemire's new series Descender an enjoyable read. It harkens back to classic sci-fi, in my opinion, and reminded me a little of the movie A.I. and the stories that inspired it, Supertoys Last All Summer Long, Supertoys When Winter Comes, and Supertoys in Other Seasons by Brian Aldiss. Whatever your take on these, I enjoyed them, and I've enjoyed Descender thus far as well.

The first volume of this book, Tin Stars, introduces the android Tim-21, his robot dog, the robot Driller, android creator Dr. Quon, government agent Telsa, and others. It also sets the scene for the immediate volume, as well as the long-term story.  Tim-21 is awakened after a ten year "sleep" to find his human family, as well as the rest of the mining colony, dead. He also discovers that androids have been outlawed, due to an attack on humanity by the gigantic android Harvesters just after he began his "sleep".  Into this mix come bounty hunters, an alien race set on destroying all androids, Dr. Quon (who may be able to unlock the reason for the Harvesters' attack), and more.

I really like the "human" aspect of Tim-21, who finds himself alone and being hunted. He becomes very resourceful, and soon begins to discover aspects of himself that tie in to the longer story of who or what the Harvesters are.

The last part of this book (issue six of the series) jumps back in time and completely turns the story on its head. There are some great reveals and the reader is forced to re-examine everything they currently know about Tim-21, Dr. Quon, and the Harvesters. It portends great things to come as the series continues.

Lemire's Descender is a great, fun read. Fans of sci-fi will really enjoy this. I've also read that the rights have been optioned for a movie. Read it now, before it hits the big screen.

I received a review copy of this book from Image Comics and Netgalley in exchange for an honest review.
Posted by Scott at 6:39 AM