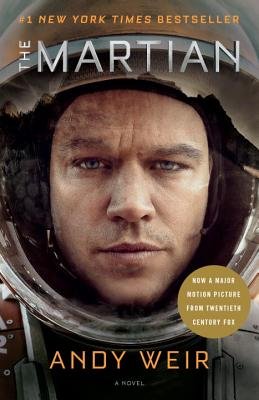 From the publisher: Six days ago, astronaut Mark Watney became one of the first people to walk on Mars.

Now, he’s sure he’ll be the first person to die there.

After a dust storm nearly kills him and forces his crew to evacuate while thinking him dead, Mark finds himself stranded and completely alone with no way to even signal Earth that he’s alive—and even if he could get word out, his supplies would be gone long before a rescue could arrive.

Chances are, though, he won’t have time to starve to death. The damaged machinery, unforgiving environment, or plain-old “human error” are much more likely to kill him first.

But Mark isn’t ready to give up yet. Drawing on his ingenuity, his engineering skills—and a relentless, dogged refusal to quit—he steadfastly confronts one seemingly insurmountable obstacle after the next. Will his resourcefulness be enough to overcome the impossible odds against him?

Andy Weir’s novel The Martian is the best book I’ve read in a long time.
When I initially read the synopsis, I was interested.  Astronaut Mark Watney, a mechanical engineer and botanist, is stranded on Mars through a freak accident.  What follows is how he attempts to survive, while hoping to be rescued.  With comparisons to Apollo 13, Castaway, and Robinson Crusoe on Mars, I was hooked.  Then I read some reader reviews, and became hesitant.  Many mentioned the detailed science, and how the plot didn’t move quickly enough.  Finally, however, I decided to give it a chance.
While the first person narrative of a man stranded on Mars risked being repetitive and boring, Weir pulled it off with flying colors.  Mark Watney was an extremely well-drawn character, a sort of everyman astronaut. His humor in the face of adversity and his ingenuity when confronted with multiple problems made him almost seem real.  The science never got in the way of what was happening; indeed, it added to the suspense and depth of the story.  Weir also knows just exactly how to keep building suspense, never letting the reader or Watney become too comfortable.
I highly recommend The Martian.  In fact, I recommended it to quite a few people while still in the middle of reading.  It moves along at a tremendous pace, and could have been read in one sitting if only I’d had the time available.  Do yourself a favor, and pick it up.
I received a review copy of this book from the Blogging for Books program in exchange for an honest review.
Posted by Scott at 6:45 AM