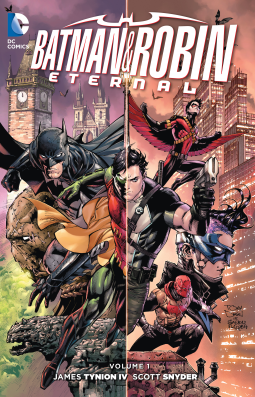 From the publisher: Five years ago, Batman and Robin worked the most disturbing case of their crimefighting careers—bringing down the organization of the ultimate human trafficker, the mysterious woman known only as Mother. At the time, Dick Grayson never quite understood the scope of that case, but now its darkest secrets are coming back to haunt him and everyone else who ever worked with Batman! With Bruce Wayne now lost to them, Dick and all his allies are out in the cold! Who can they trust? Is someone among them not who they say they are? And who is the deadly, silent young woman in black who's come to Gotham City looking for Batman?

In this sequel to the New York Times best-selling series BATMAN ETERNAL, prepare yourself for international intrigue, twists and turns, and new additions to the world of Batman and Robin, from showrunners James Tynion IV and Scott Snyder! Collects BATMAN AND ROBIN ETERNAL #1-13.

I just finished reading Batman and Robin Eternal Vol. 1, and its the best Batman book I've read in awhile. It even tops Batman Eternal, which is saying something. Scott Snyder and James Tynion IV have created a potential masterpiece.

With Bruce Wayne currently unaware that he is Batman, and Jim Gordon roaming Gotham's streets in a Bat-Suit, this story focuses on the three former Robins: Dick Grayson, Jason Todd, and Tim Drake. Batman does play a large role, but it is through the use of flashbacks, as we get the story of Dick Grayson's first international adventure, chasing the Scarecrow to Prague. The storyline set in the present concerns a mysterious message delivered to Dick Grayson by Cassandra Cain, making her first appearance in the New 52. Dick receives a list that includes not only his name, but Jason's, Tim's, and Harper Row's, the new hero known as Bluebird. They are put on the trail of Orphan, a hooded man who is attempting to kill all four of them, and someone known only as "Mother". Along the way, various Bat-characters show up, including Azrael's arrival in the New 52. As the heroes continue their quest, the past and the present continue to converge.

With this first volume, Snyder and Tynion IV have set up a story that has the chance to have a major impact on the Batman myths. Things are hinted at that could shift how readers view Batman and his varying Robins. The story ends with a nice cliffhanger that has me anxious to see what happens next.

I give my highest possible recommendation to Scott Snyder and James Tynion's IV Batman and Robin Eternal Vol. 1.

I received a preview copy of this book from DC Comics and Netgalley in exchange for an honest review.
Posted by Scott at 9:01 AM