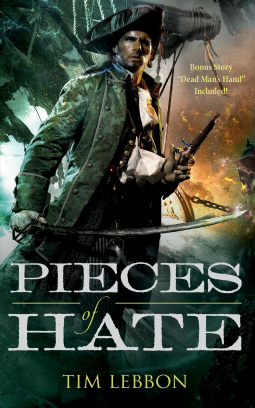 From the publisher: During the Dark Ages, a thing named Temple slaughtered Gabriel's family. A man with snake eyes charged him to pursue the assassin wherever he may strike next, and destroy him. Gabriel never believed he’d still be following Temple almost a thousand years later.


Because Temple may be a demon, the man with snake eyes cursed Gabriel with a life long enough to hunt him down. Now he has picked up Temple's scent again. The Caribbean sea is awash with pirate blood, and in such turmoil the outcome of any fight is far from certain.

Free bonus novelette: Dead Man’s Hand
In the wilderness of the American West, the assassin is set to strike again. Despite his centuries-long curse, Gabriel is still but a man, scarred and bitter. The town of Deadwood has seen many such men... though it’s never seen anything quite like the half-demon known as Temple.

Pieces of Hate, by Tim Lebbon, actually contains two stories: Pieces of Hate and Dead Man's Hand. They are part of a series (at least they are listed that way) but can be read independently of each other. The basic gist is this: Gabriel's family was killed by a demon/assassin named Temple some 700 years ago. Gabriel was given the mission to hunt Temple down and kill him. Both are near immortal.

Dead Man's Hand was the first story in the book, and was the first published. In it, a citizen of Deadwood, South Dakota recounts the events surrounding Gabriel, Temple, and Wild Bill Hickock. Not a lot is revealed about any of the principal characters.

Pieces of Hate is longer (novella length) and takes place prior to Dead Man's Hand. It's setting is in the Caribbean during the high time of pirates and privateers. Once again, Gabriel is hunting Temple, who in turn is hunting Captain Henry Morgan.

I generally like the idea of these two stories. Lebbon does a fine job of building the suspense and creating a mood of despair. He has also done a good job of placing his characters into the actual events of history. A man tracking down an evil being throughout history has the makings of some interesting tales.

However, there were a few issues that I ran into. The first is that for there to be multiple stories, Temple inevitably gets away and survives. This reduces the suspense somewhat, particularly when chronologically the second story takes place before the first. Another issue I had is just the overall bleakness involved in the tales. There is very little redeeming goodness anywhere to be found. This is more an issue of personal taste than anything. The last thing is that I found that the length of Dead Man's Hand (short story) led to tighter story-telling. While Pieces of Hate provided more of Gabriel's background, the novella length resulted in the story wandering a bit.

Overall, Tim Lebbon's Pieces of Hate is okay. If you are a fan of his work, I suppose this would appeal to you. Personally, I like a little more light and hope in my stories.

I received a preview copy of this book from Macmillan/Tor-Forge in exchange for an honest review.
Posted by Scott at 6:56 AM