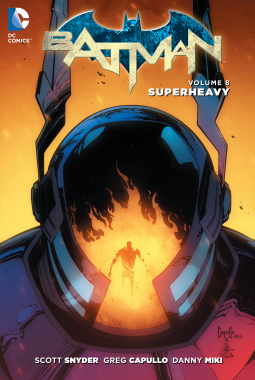 From the publisher: After his deadliest battle to date, Batman is bruised, battered and scarred. And forever changed.

Now, on the streets of Gotham, in place of the cape and cowl roams an 8-foot mechanized suit of armor. More powerful than ever before, Batman's pursuit of justice has never been more swift or efficient. But who is the new Dark Knight? And why is he ... or she here?

Scott Snyder is at it again with Batman Vol. 8: Superheavy. How do you follow up the Joker: Endgame storyline, where it appeared that Batman was killed along with the Joker? Why, create a new Batman. And that is what Snyder has done. He's taken former Commissioner Jim Gordon and given him a suit of Bat-Armor and a support team. This new Batman is also sanctioned by the city and the police force. For the reader, this puts a new spin on an old, familiar hero and gives the Batman mythos a new perspective.

In addition to putting Jim Gordon in the Bat-Suit, Snyder also reveals that Bruce Wayne didn't die (not a big spoiler). However, Bruce is different. Something happened to him that has changed him; he doesn't have the memories and pain of his parents' deaths that drove him to become Batman. Consequently, he has no idea or desire to be Batman. This storyline is a wonderful contrast with the look at Jim Gordon becoming Batman.

Probably my favorite part of Batman Vol. 8 is a conversation between Alfred Pennyworth and Clark Kent. They are discussing whether to push Bruce back into being Batman. Alfred, with a lot of emotion, begs Clark to leave him be, pointing out that this is who Bruce should have been.

Overall, I highly recommend Batman Vol. 8: Superheavy. Snyder is a fantastic writer who continually manages to bring something new to a character who is more than 75 years old. This is also a good starting spot for new readers, with the change in Batman's identity.

I received a preview copy of this book from DC Comics and Netgalley in exchange for an honest review.
Posted by Scott at 7:10 AM