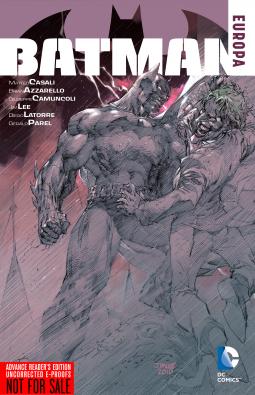 From the publisher: The impossible has happened and Batman is on the verge of being taken down by an enemy he cannot defeat: a virus for which there is no cure! And the only hope for his salvation is the Joker! Who infected Batman, what does the Clown Prince of Crime know, and how will The Dark Knight get that information? Together, the enemies crisscross Europe, desperate to find answers before time runs out.

Traveling through Europe to destinations like Prague, Paris, and Rome, Batman must defeat this disease before it defeats him. The sworn enemies are forced to work together to find the cure to what ails them.

Batman Europa, by Brian Azzarello and Matteo Casali, is a pretty cool Batman story. Taking the standard idea of someone drugging Batman and lifting it into new territory, Azzarello and Casali create a fun and very readable Batman and Joker story.

When both are infected with the Colossus virus, which leads to death, Batman and Joker are forced to work together as they chase various leads and a villain through some of Europe's great old cities. As they attempt to find a cure and catch the person responsible, the pair travel from Gotham to Berlin, Prague, Paris, and Rome. Each city brings them a little closer to apprehending the villain and solving the mystery.

The story itself is done well, and the interaction between Batman and Joker is fun. Particularly of note is the Colossus virus driving Batman near delirium, making Joker the more rational of the two. There adventures in the various cities is also cool, particularly in Paris, where Joker appears to have a following reminiscent of Jerry Lewis's popularity among the French.

While the story is good, the star of the book, however, is the art, which is done by four different artists: Jim Lee, Giuseppe Camuncoli, Diego Latorre, and Gerald Parel. Each brings a unique sensibility to the particular city they illustrate, but there is a cohesion running through the book as a whole. Additionally, the tone and styles complement the story perfectly, adding to the feverish feel of Batman and Joker being infected.

Overall, I would recommend Batman Europa by Brian Azzarello and Matteo Casali. Batman fans will enjoy the book, as will readers who are intrigued by this creative crossover between American and European writers and artists.